As a superfan of both the Lord of the Rings and Hobbit trilogies, a visit to Hobbiton has long been at the top of my Bucket List. After extensive research on what was the finest tour to best take in the rolling green landscapes and Hobbit holes of Matamata, I settled upon the Intercity Tour, which incorporated a visit to Waitomo Caves and that all important meal in the Green Dragon. 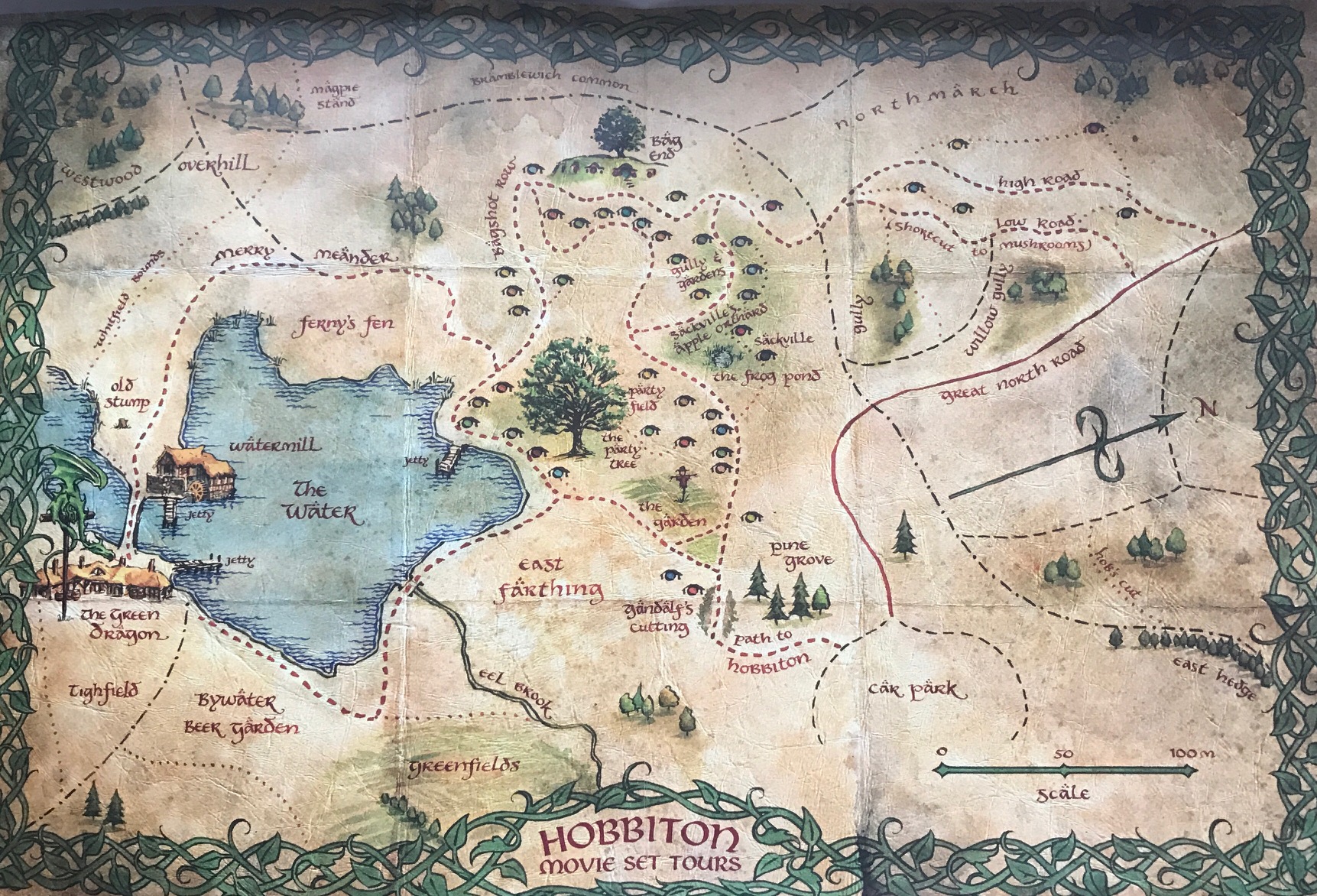 There’s something magical about Hobbiton. In the films It is wonderfully portrayed as a place of peace, happiness and simple living (with the exception of course, of that horrible time in the LOTR trilogy that the orcs of mordor nearly overran it).  The little humble abodes of Hobbits are cute and quirky and since first seeing them on-screen in 2001, I have wanted to stand amidst the shire and essentially, be a Hobbit… 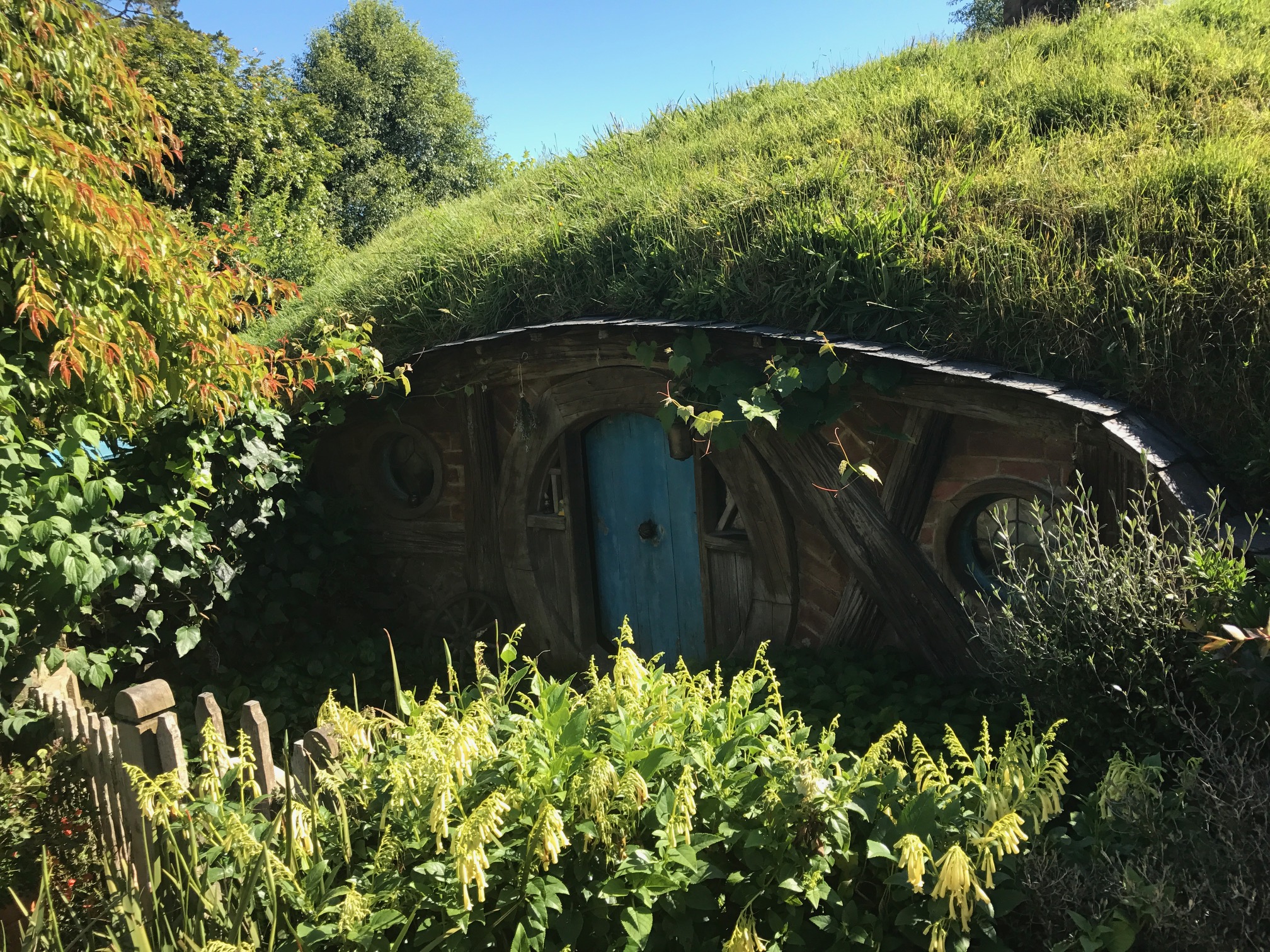 Our tour kicked off at the bus station at the back of the SkyCity Hotel at 7am and by 10am we had arrived at Matamata (the location of the Hobbiton film set).  Firstly, major kudos to our driver, Lewis, who for a full 2 hours educated us on Auckland and New Zealand in general.  What an interesting and knowledgeable fella he was and in fact, most of the tips and facts shared in my previous post, come directly from him. 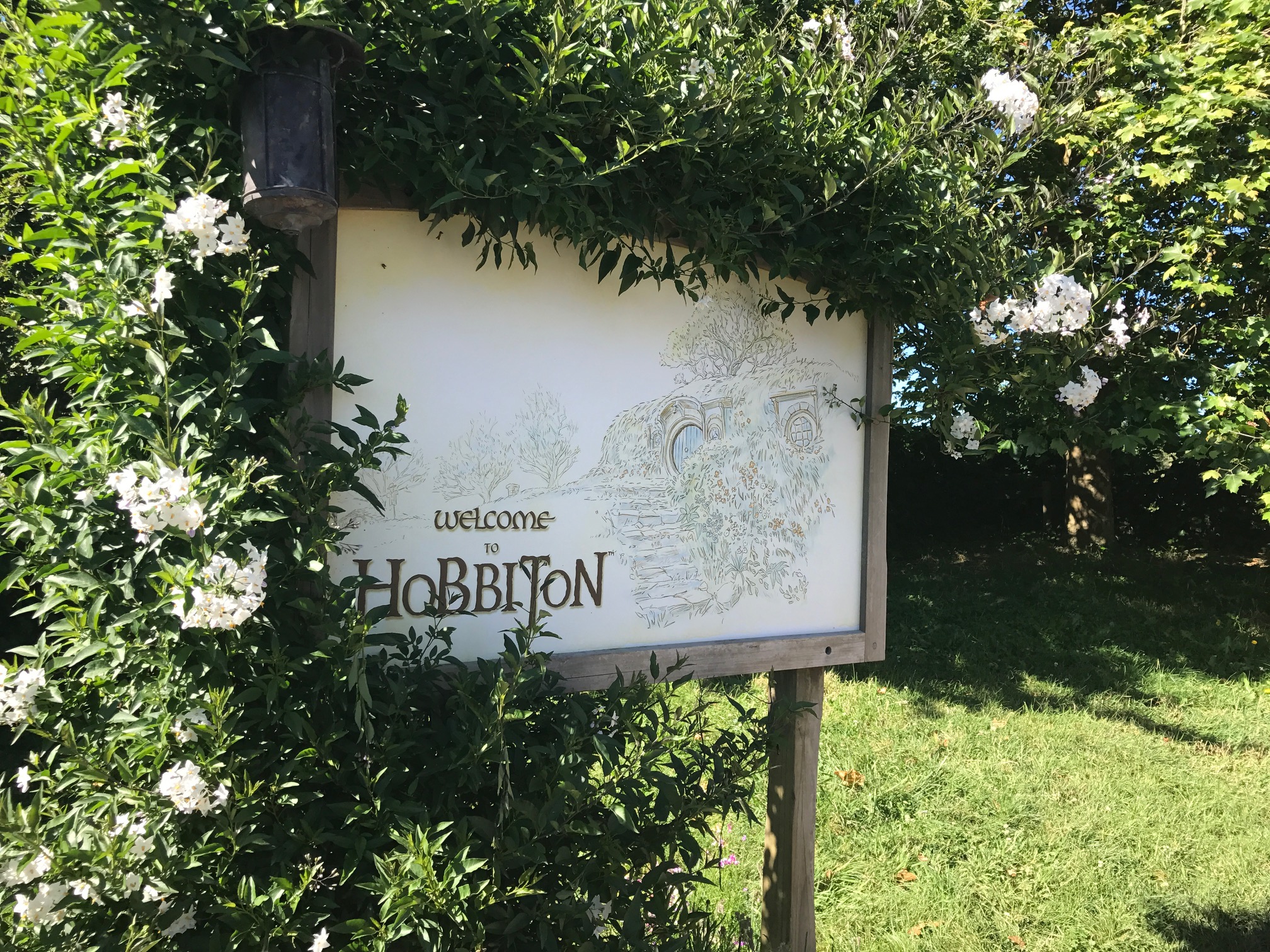 On arrival at the movie set, you are greeted by a guide (pretty sure only superfans could bag this job) and your group is then taken on a tour of the set. 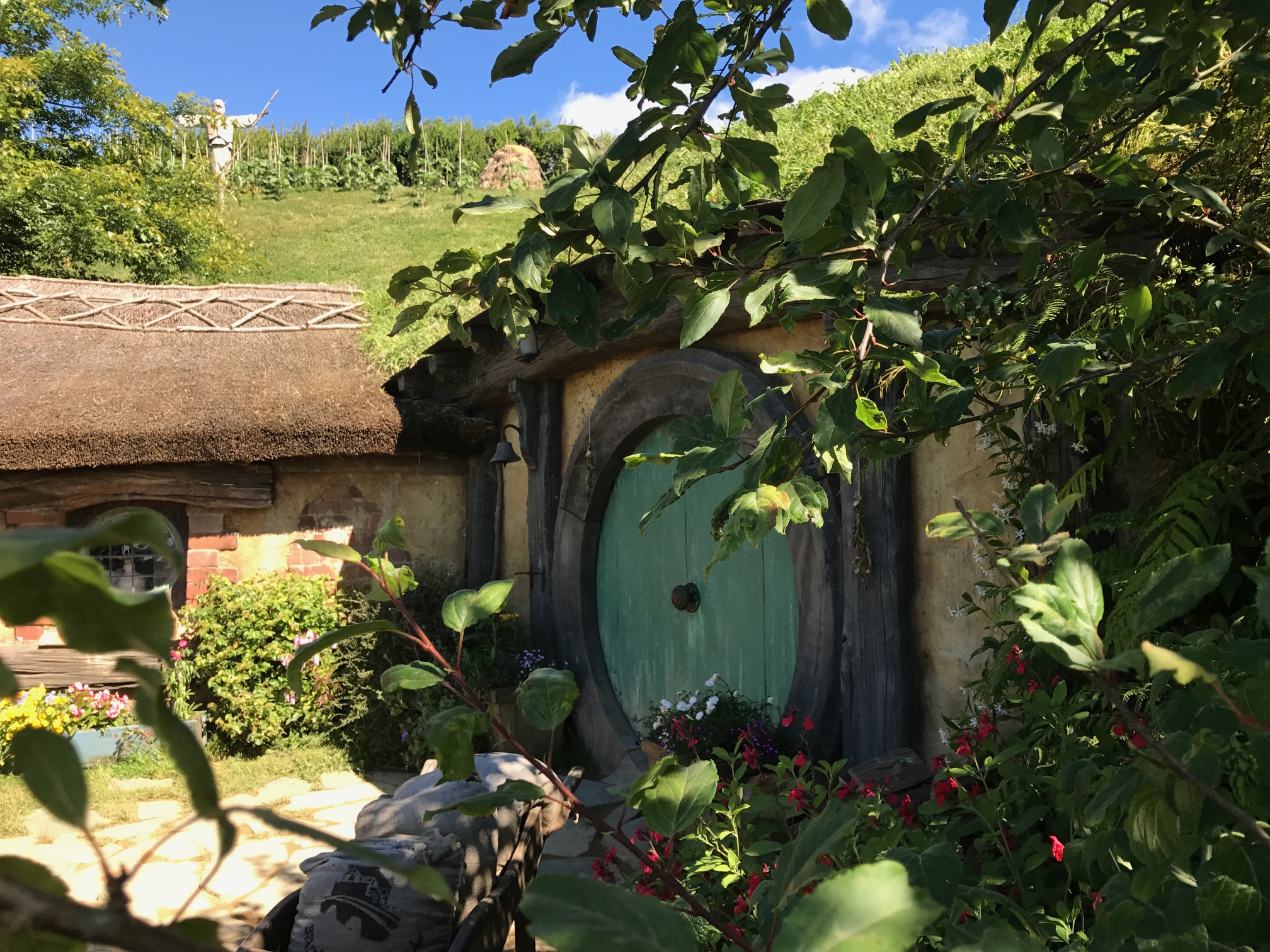 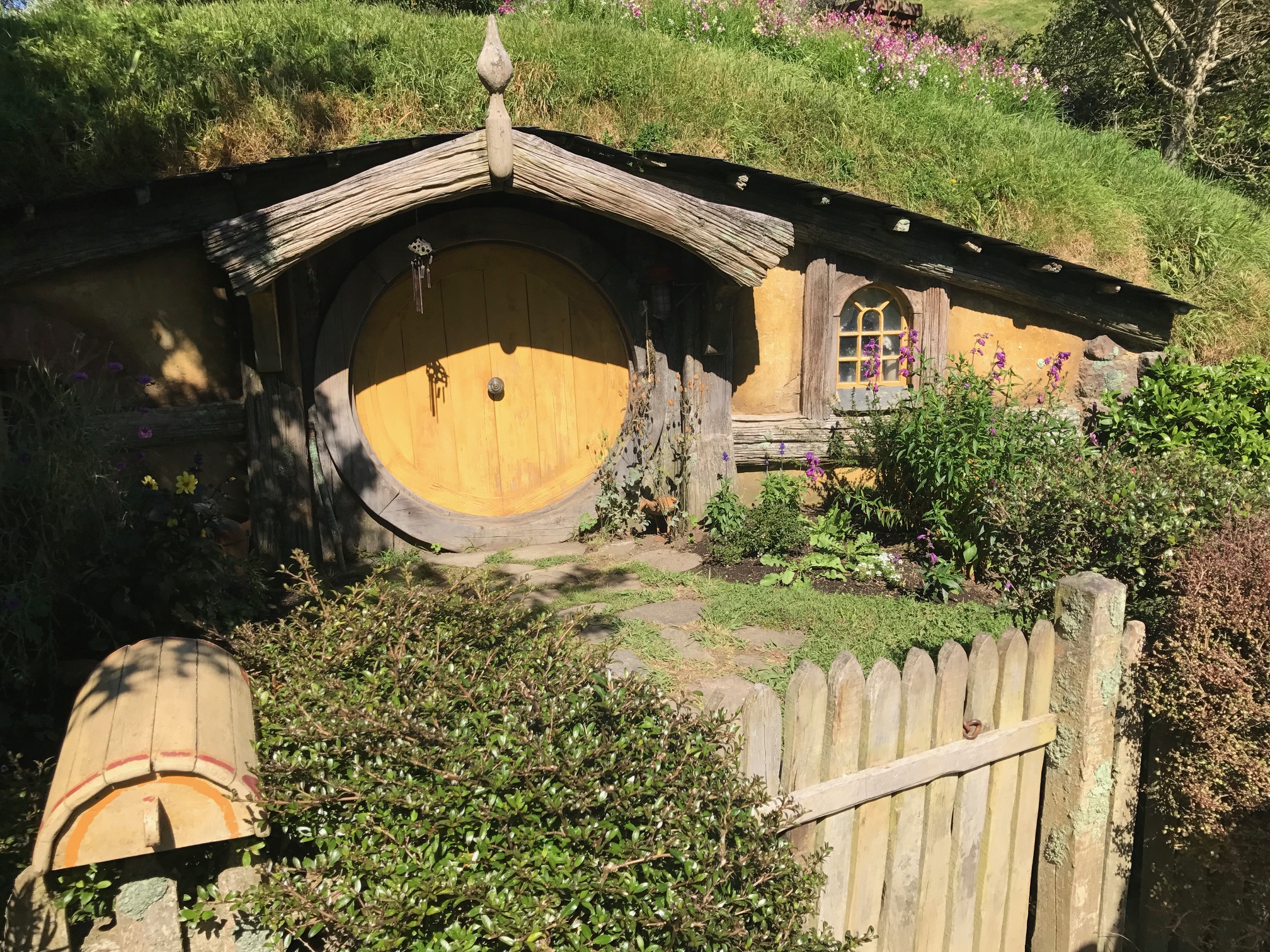 Winding past hobbit holes and notable areas of the film, you learn how the original set was made of polystyrene, which was dismantled after filming to ensure the land was returned to its original condition.  However when it came to the filming for the Hobbit series, the Alexander family (who owned the farm the film set was located) asked Peter Jackson to re-make it permanent this time. 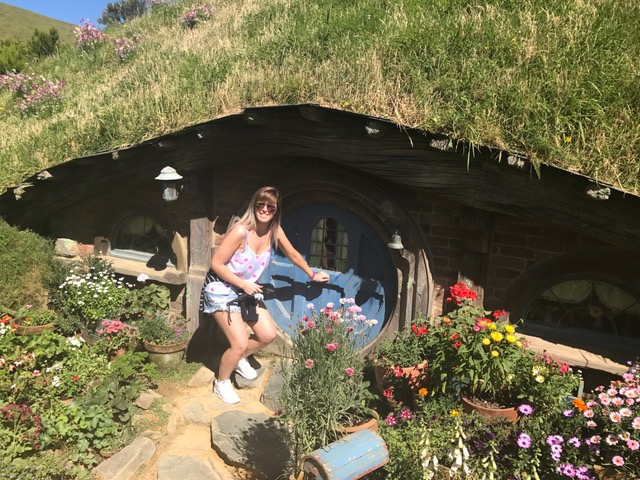 By this point tourists had been coming from around the globe just to see the farmland and imagine the shire, so much so the family were running tours.  But of course they saw the growth potential of their tours if the set was real and they could not have been more right.  Every group was bursting full when we were there so guys make sure you BOOK IN ADVANCE, as in months in advance, to avoid disappointment of all tours being full.

Something thing to know before you go, the hobbit holes are not built up inside (with the exception of the entrance hall of Bag End which displays some props).  All the filming from inside any hobbit holes was done in Wellington. 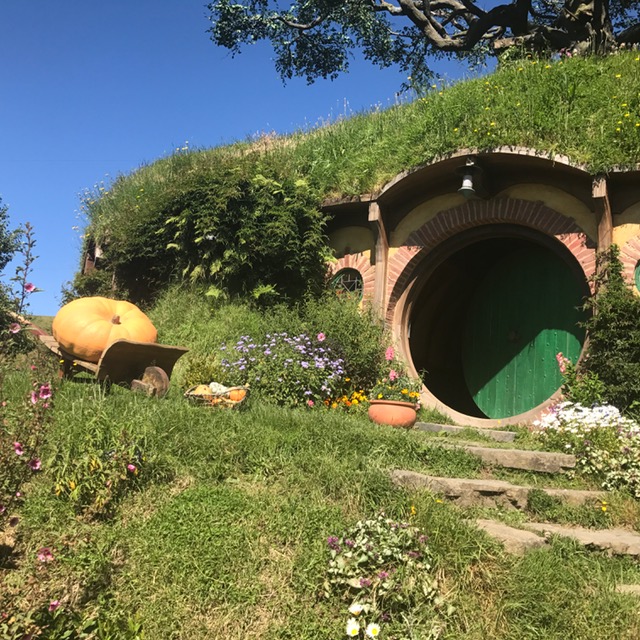 I know what you are thinking… how much did the Alexander family hit the jackpot???!!!!

Apparently it all came about when movie scouts were flying over the North Island and spotted the conical style hills of the Alexander Farm, they landed he helicopter and started a conversation with the family.  Thereafter Peter Jackson was flown in and the deal was done.

Peter Jackson then went on to ask the New Zealand Government if they could help with the funding of the film to which the answer was no.  However the Prime Minister at the time gave him the use of the New Zealand Army to help build the set and then later have starring roles in the movies as Orcs!  Not a bad trade off if you ask me. 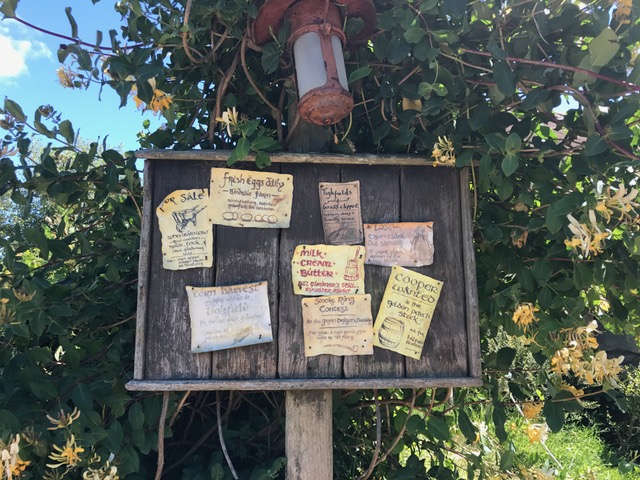 So the main reason for my going with the Intercity Tour over other Hobbiton tours, of which there are plenty, was because it included not only a drink in the Green Dragon, but also a buffet feast ‘fit for Bilbo’s party’.  And this was not false advertising folks, the food was actually amazing and it was set up in the marquee next to the pub.  Homemade 2-course goodness, which you could expect Hobbits to be accustomed to. 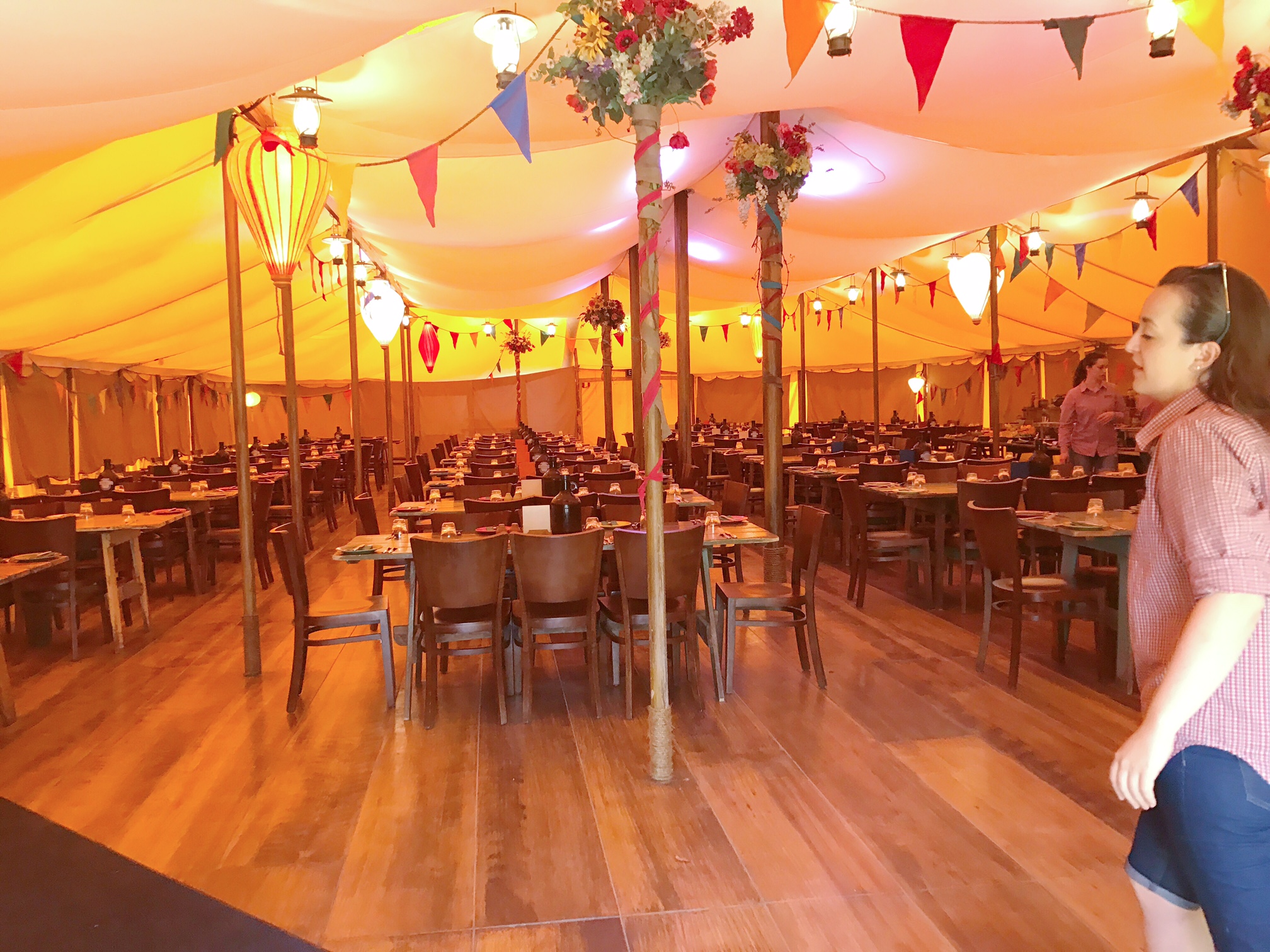 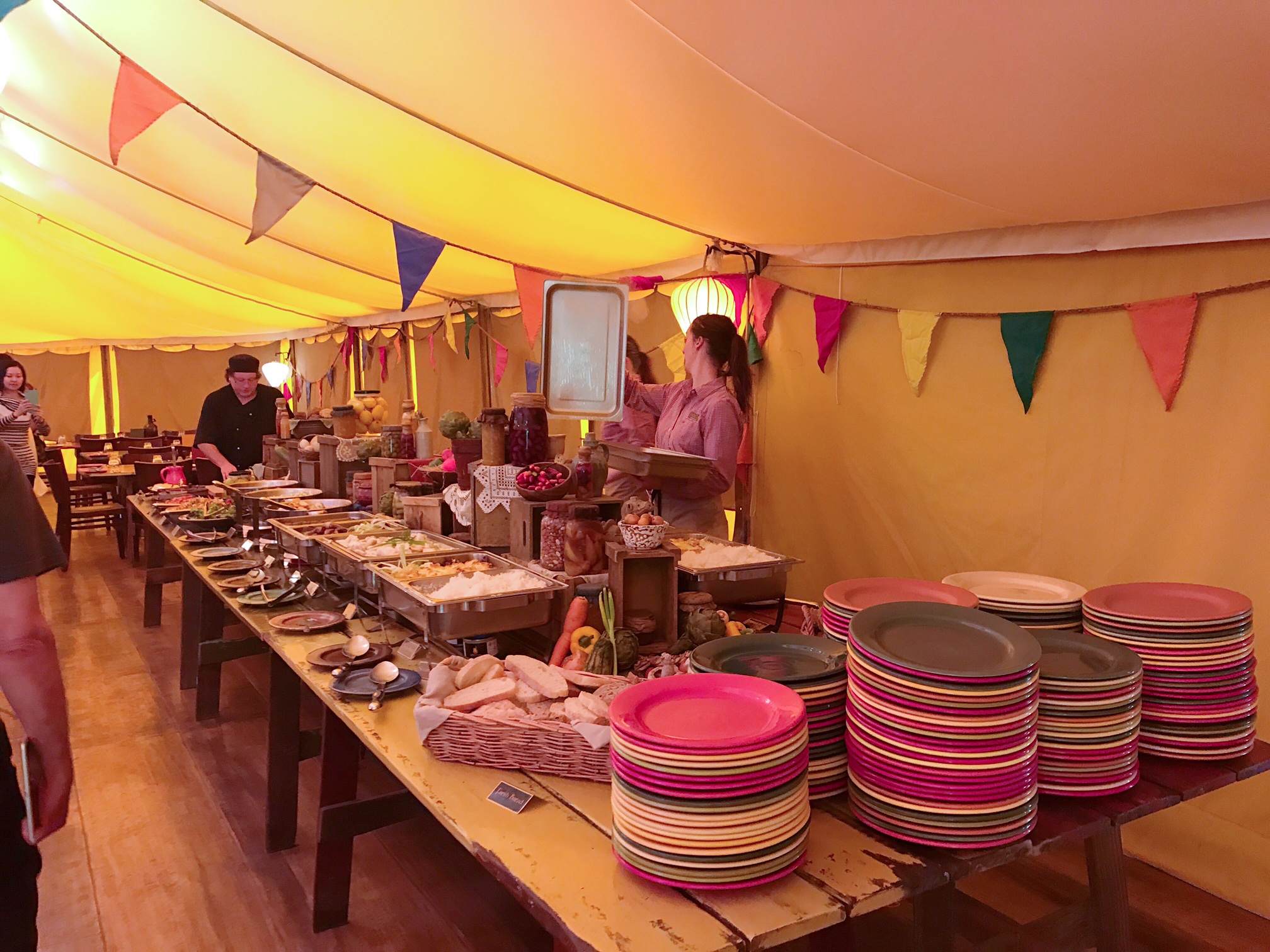 The beverages in the old-worldy Green Dragon are served in the clay mugs you see Hobbits clinking together in the films. Choose between an apple cider, pale ale, dark ale or ginger beer and make sure you get a pic having a drink in the pub! 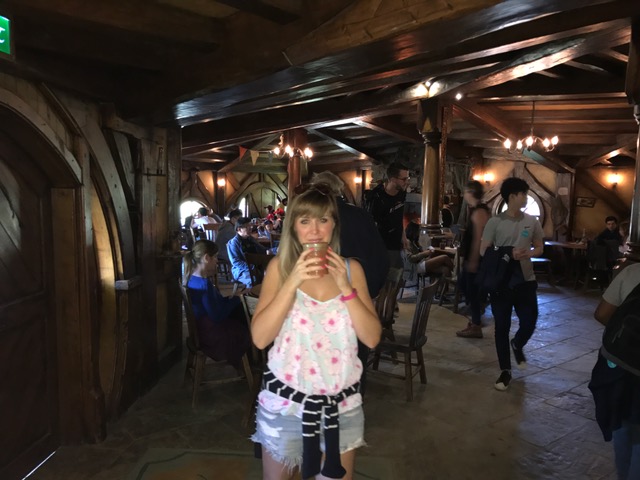 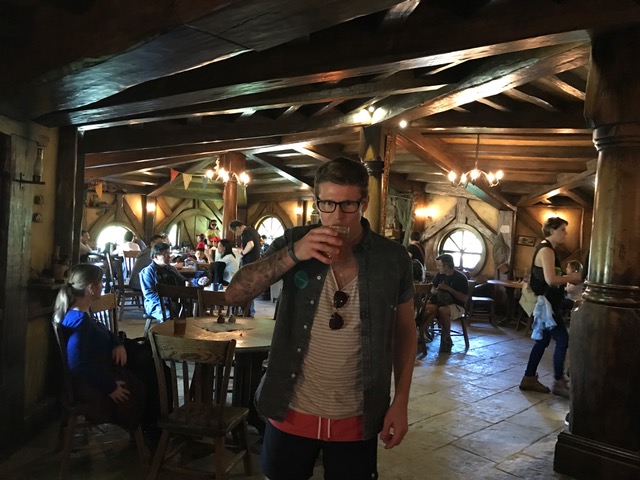 After spending about 2 hours at Hobbiton, your tour then carries on to Waitomo Caves, which takes about 1 hour 15 minutes to get to on wheels.

The only negative about Waitomo Caves is that you can’t take any pictures inside the caves and believe me, you will want to.  Your guide is well versed to look out for camera use – a member of our group thought they were being sneaky with a Go Pro, but no such luck!

And it is for this very reason I only have one lousy pic to show from this part of the tour (below is when we exited the caves!). 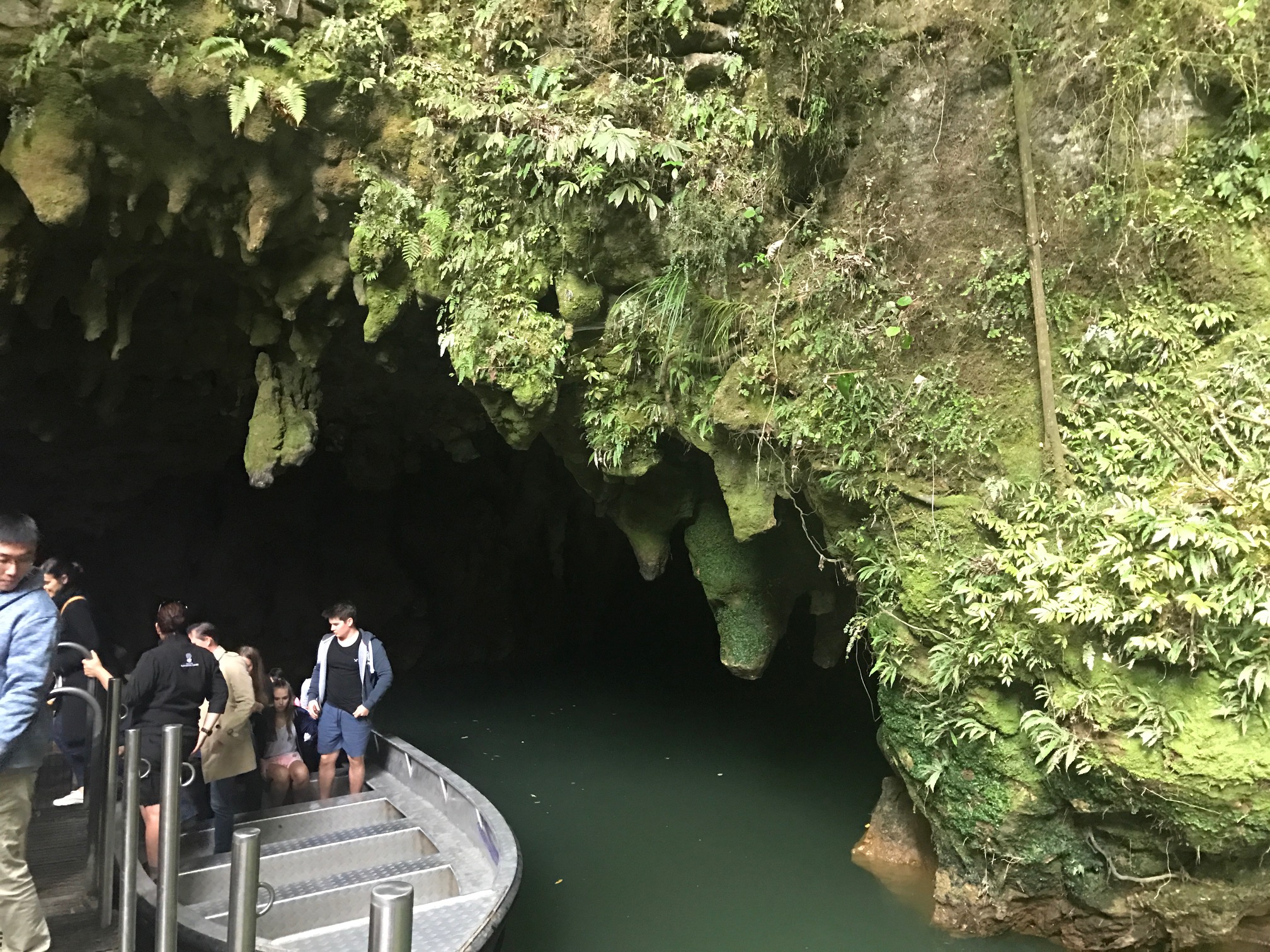 Formed along the faultline of an earthquake is estimated that the caves are 30 million years old.  You will be surprised to hear that it has been millions of years of water trickling into the caves that has created the stunning limestone and calcified rocks that surround you as you venture deeper.  Be aware also that you cannot touch the rocks as the oil in human skin makes them black.

Oh and another thing to consider is the accessibility of the caves.  They are pretty dark with steep stairs at points and so not the best for little ones unless carried or elderly folks who struggle at times when on their feet.

When you reach the ‘auditorium’ of the caves, this is where the wondrous geology of the caves truly sank in for me.  It is in here that stars such as Katy Perry and Rod Stewart have performed (this is down to the acoustics being top notch).  Not only that but the caves plays host to weddings (think our guide said there had been thirteen in total) and  yearly Christmas Choir show.

From the auditorium you edge closer to the glow worm grotto, where you board a canoe and your guide sails you around a pitch black cave under a canopy of twinkling blue lights created by these pretty magical insects.

Whilst in that canoe with your group, in the silence and the wonderment of the glow worms vista, I found myself having a bit of moment and I am sure you will too.

What’s more, you can expect to be back in Auckland between 6pm -6.30pm giving you the rest of your night to enjoy!

To check out the full itinerary of the Intercity tour and to book, click here.

Leave a comment if you have ever done this tour or plan to, I would love to hear from you x