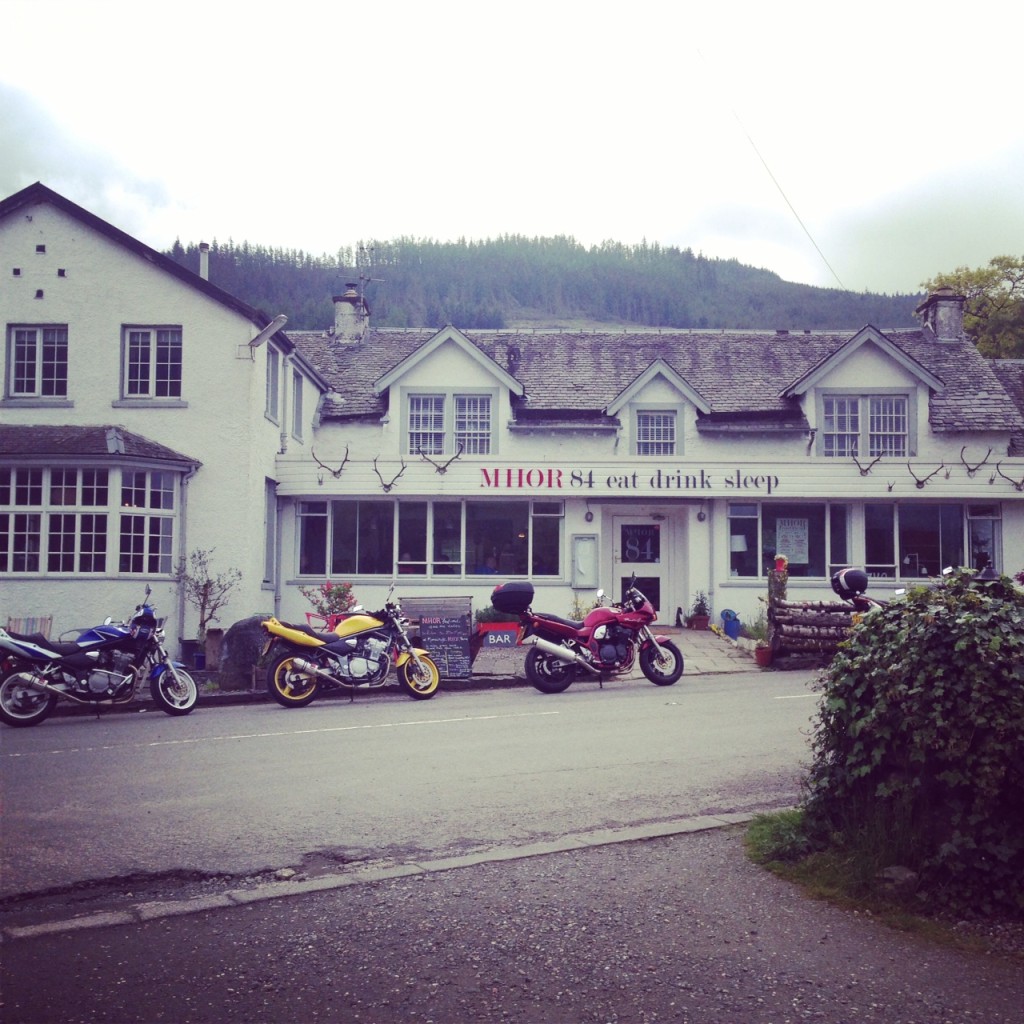 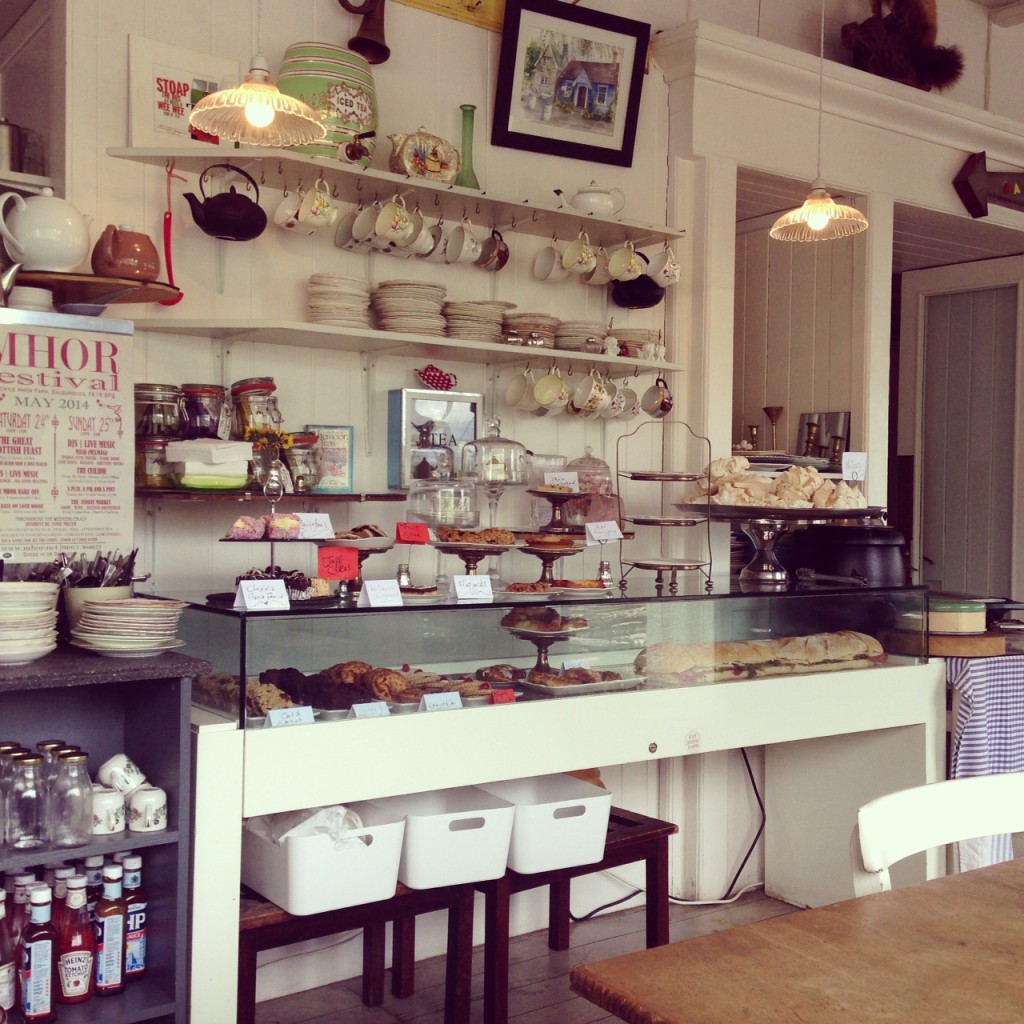 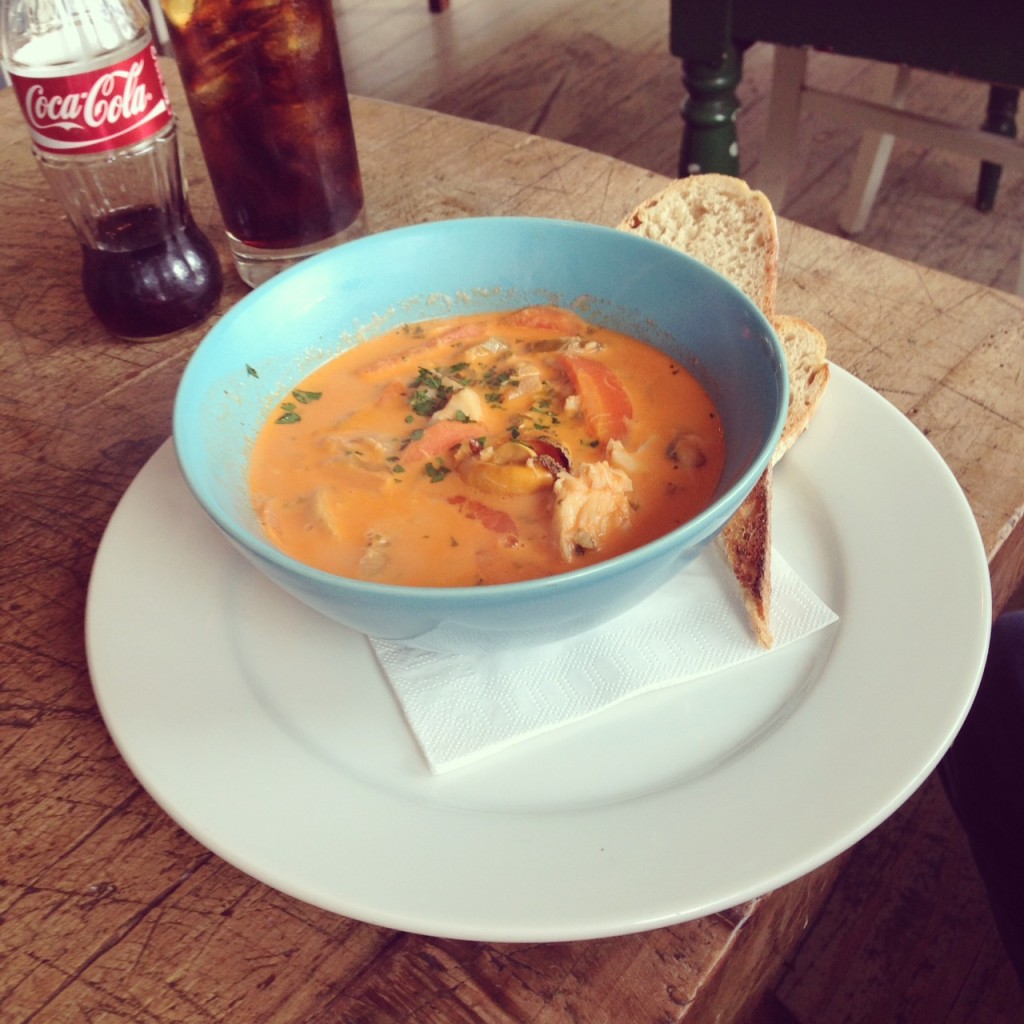 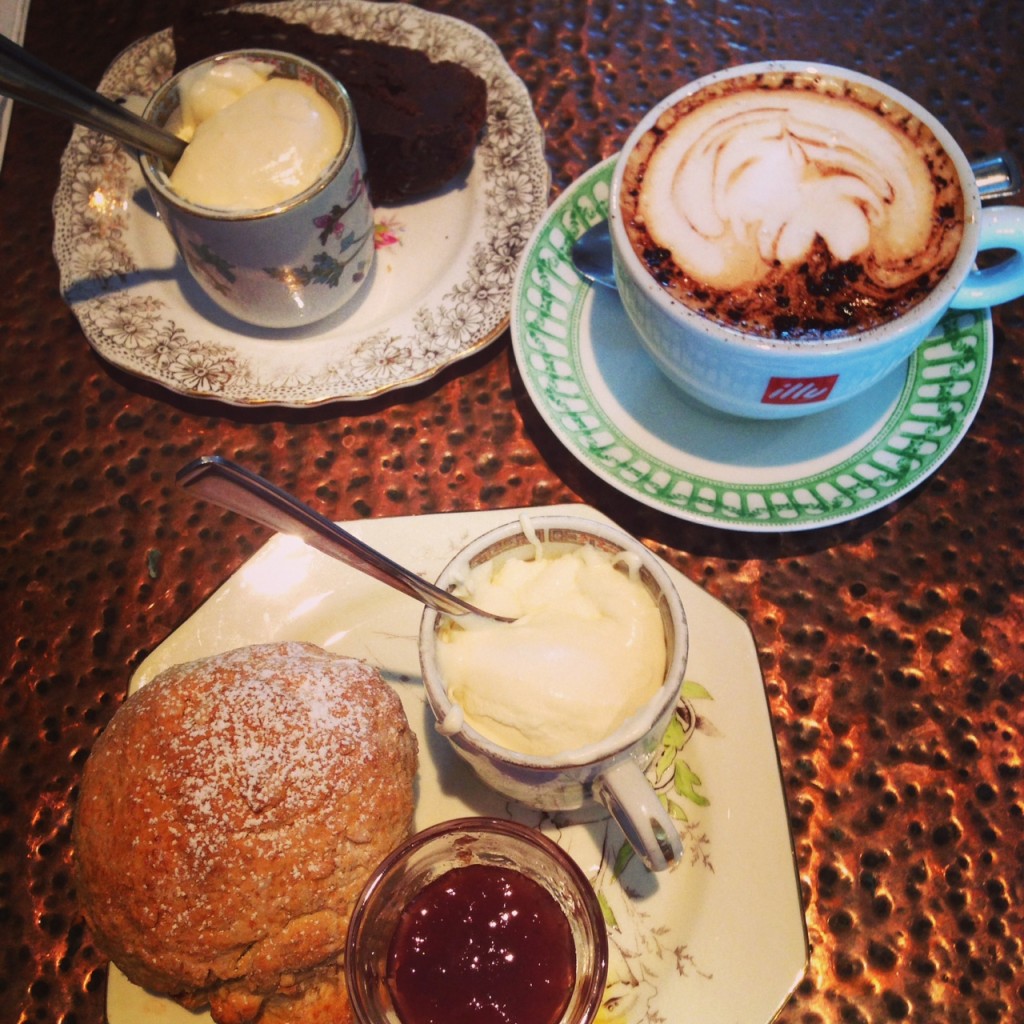 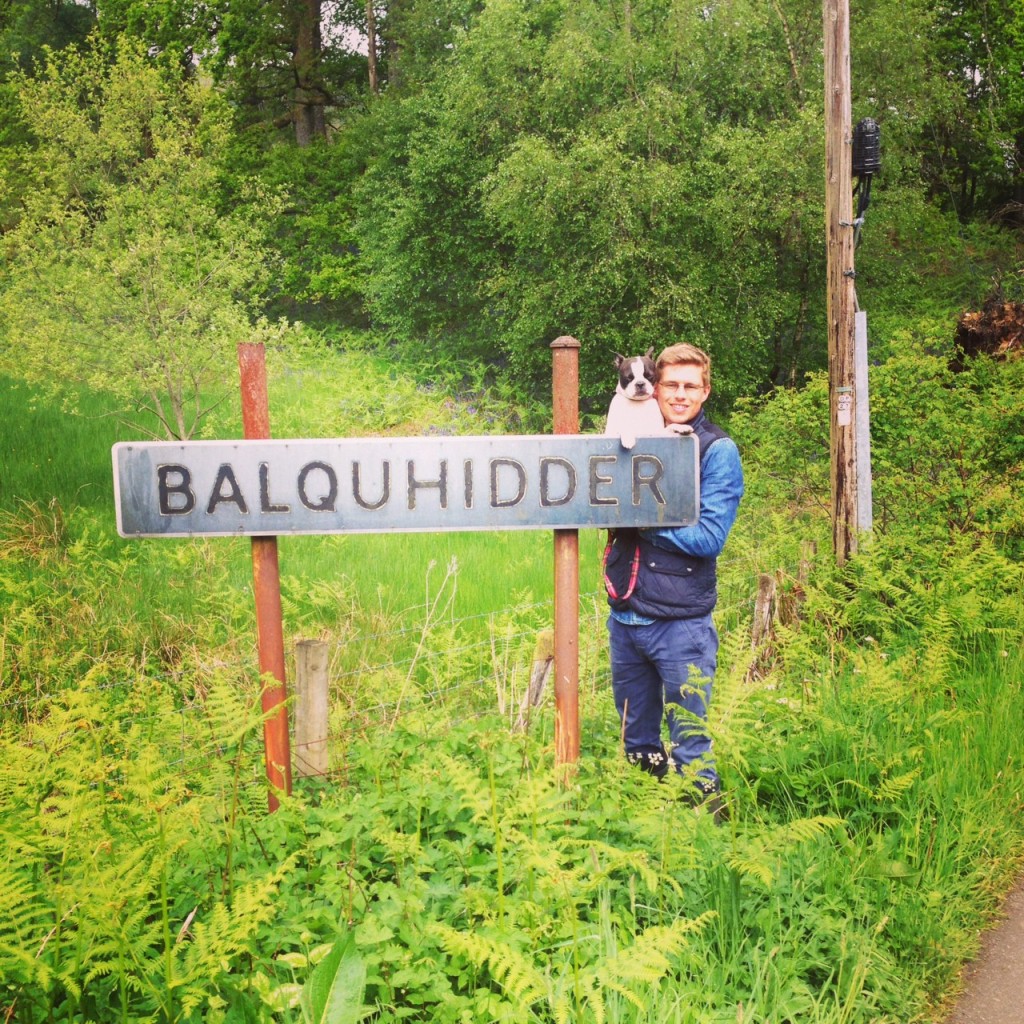 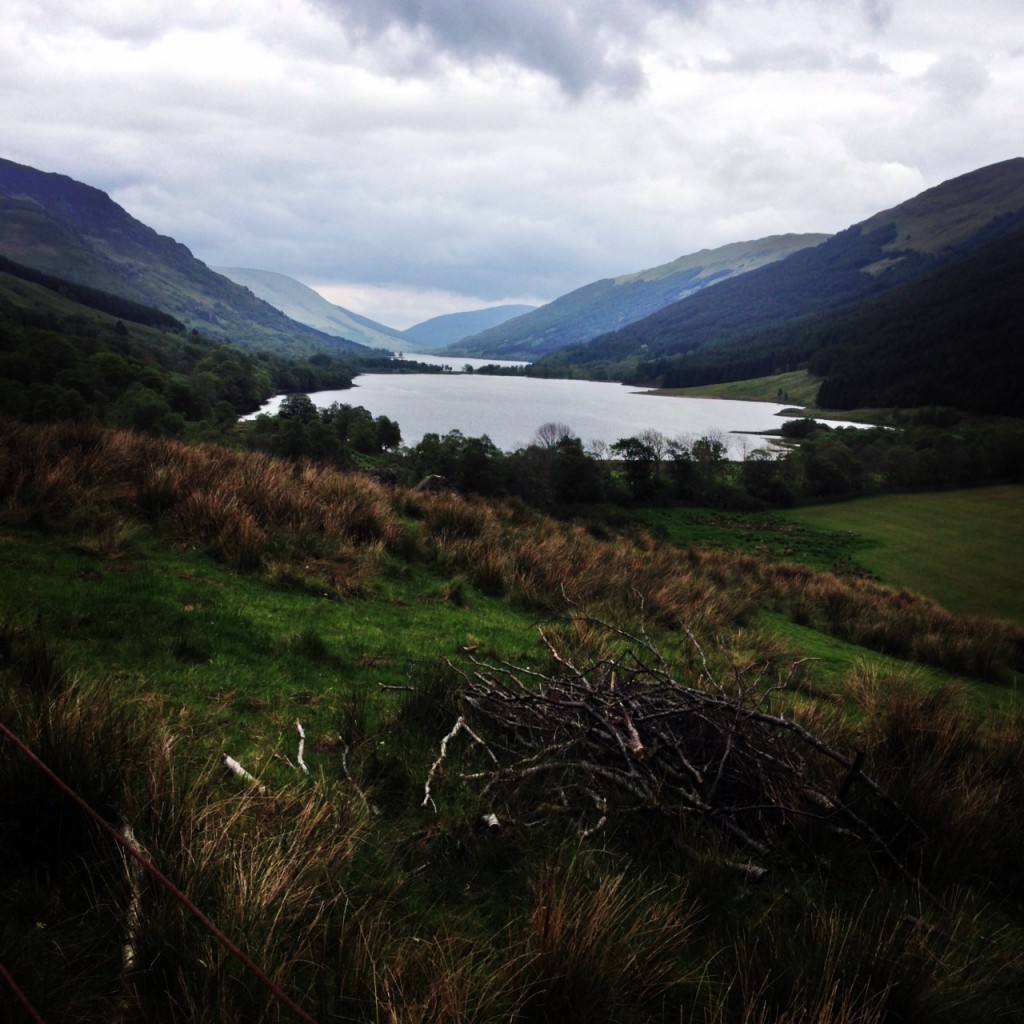 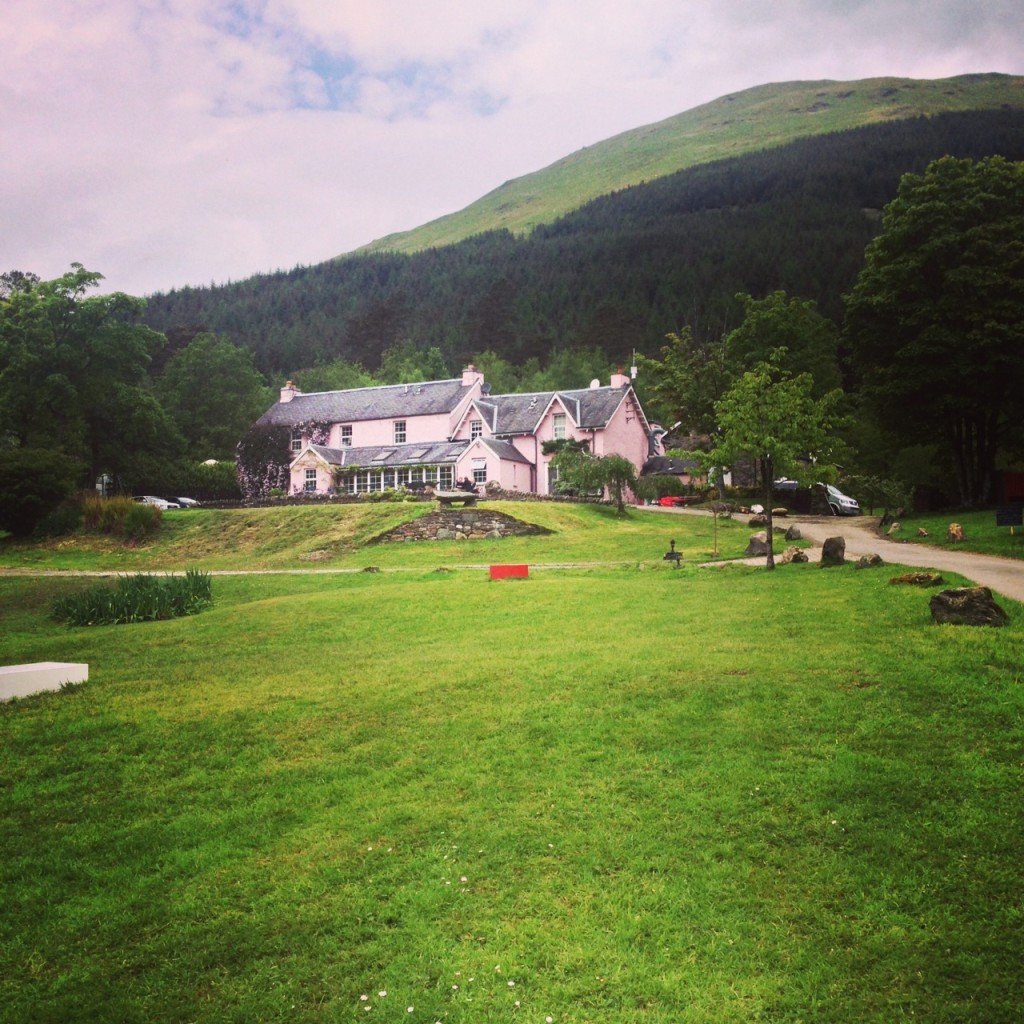 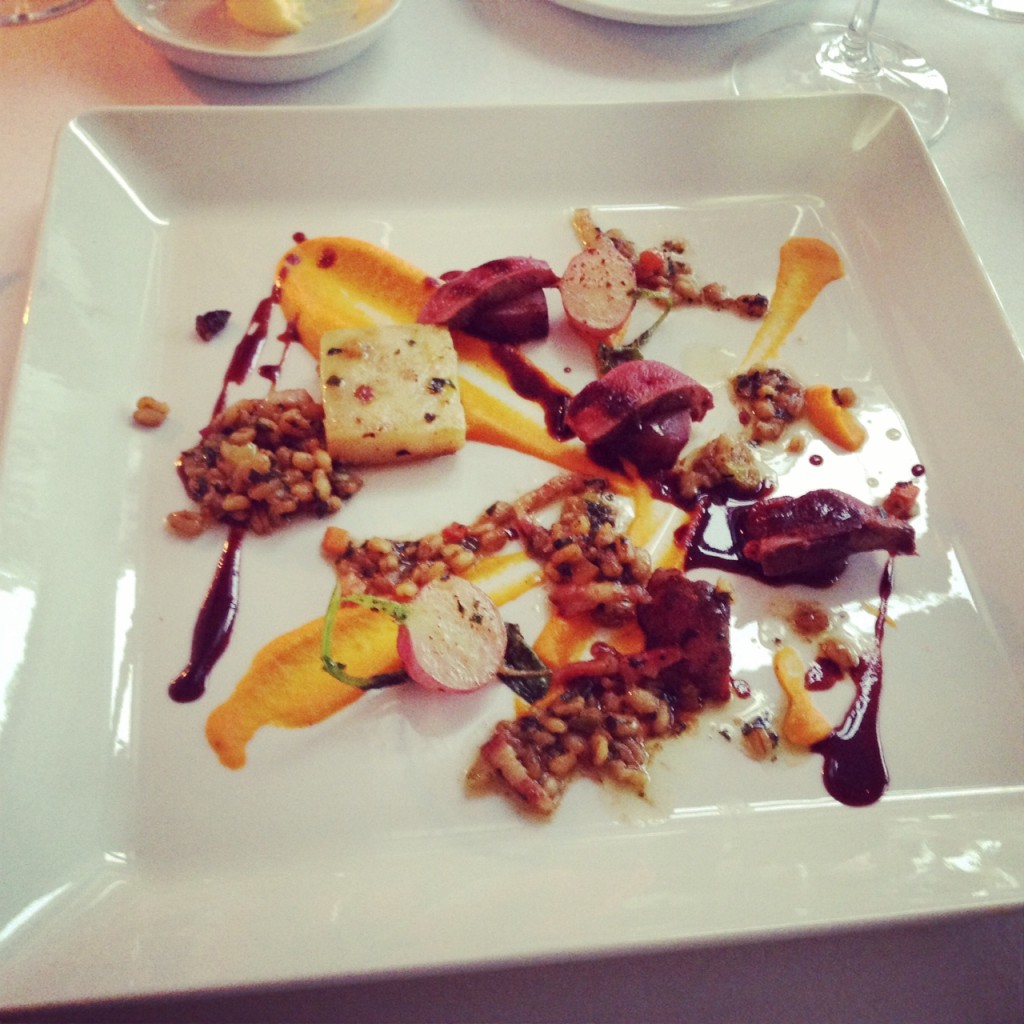 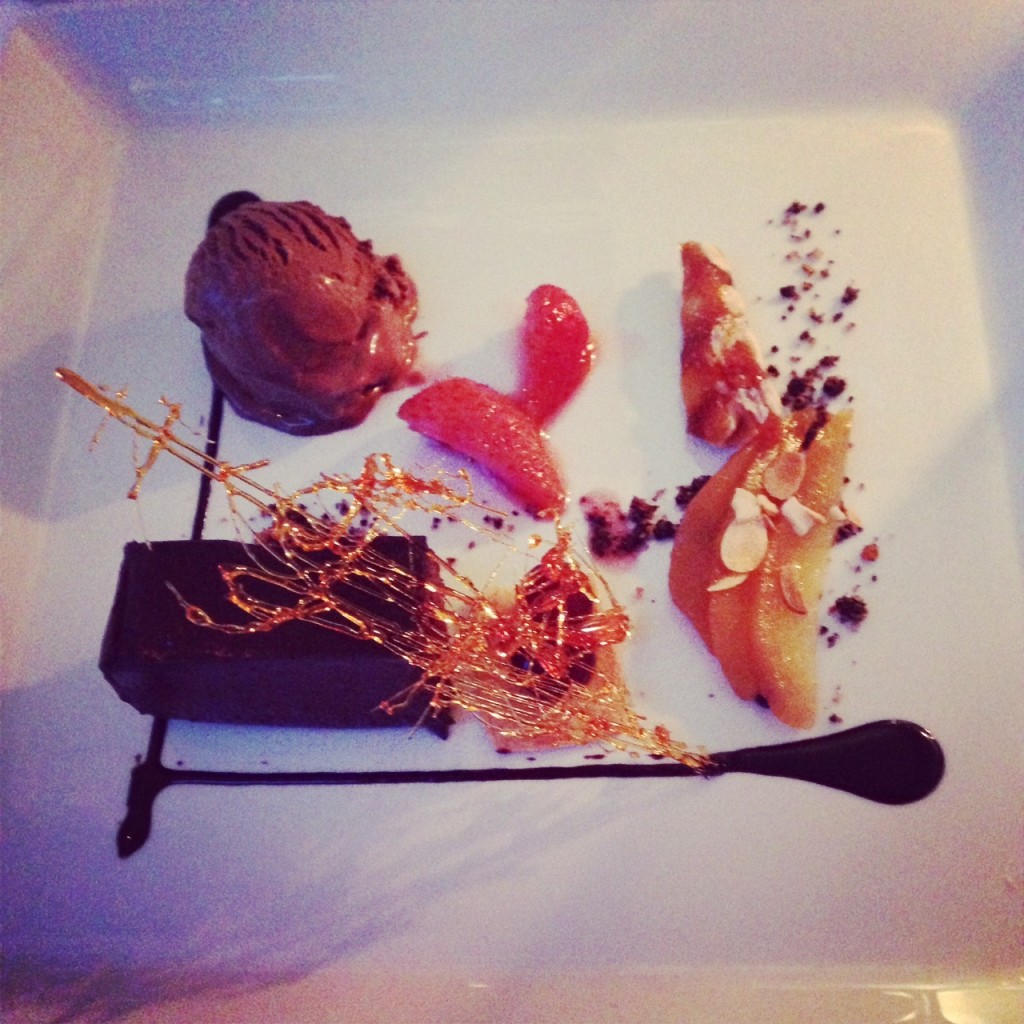 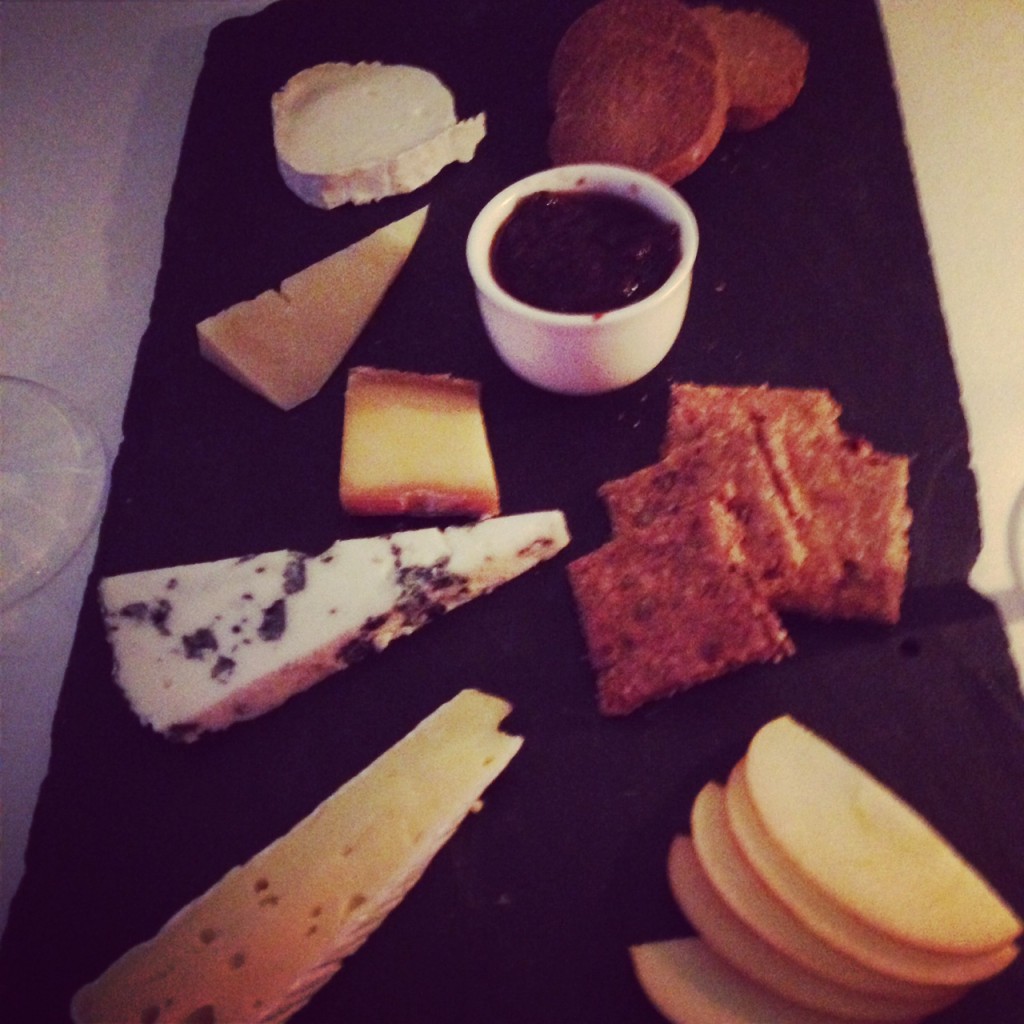 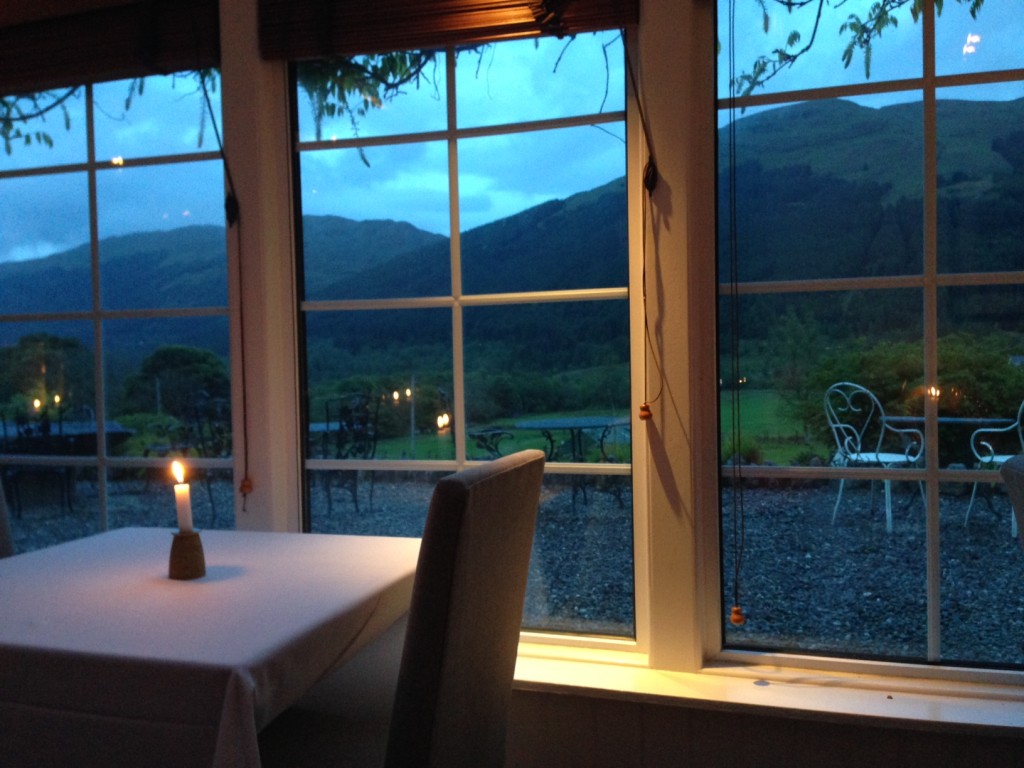 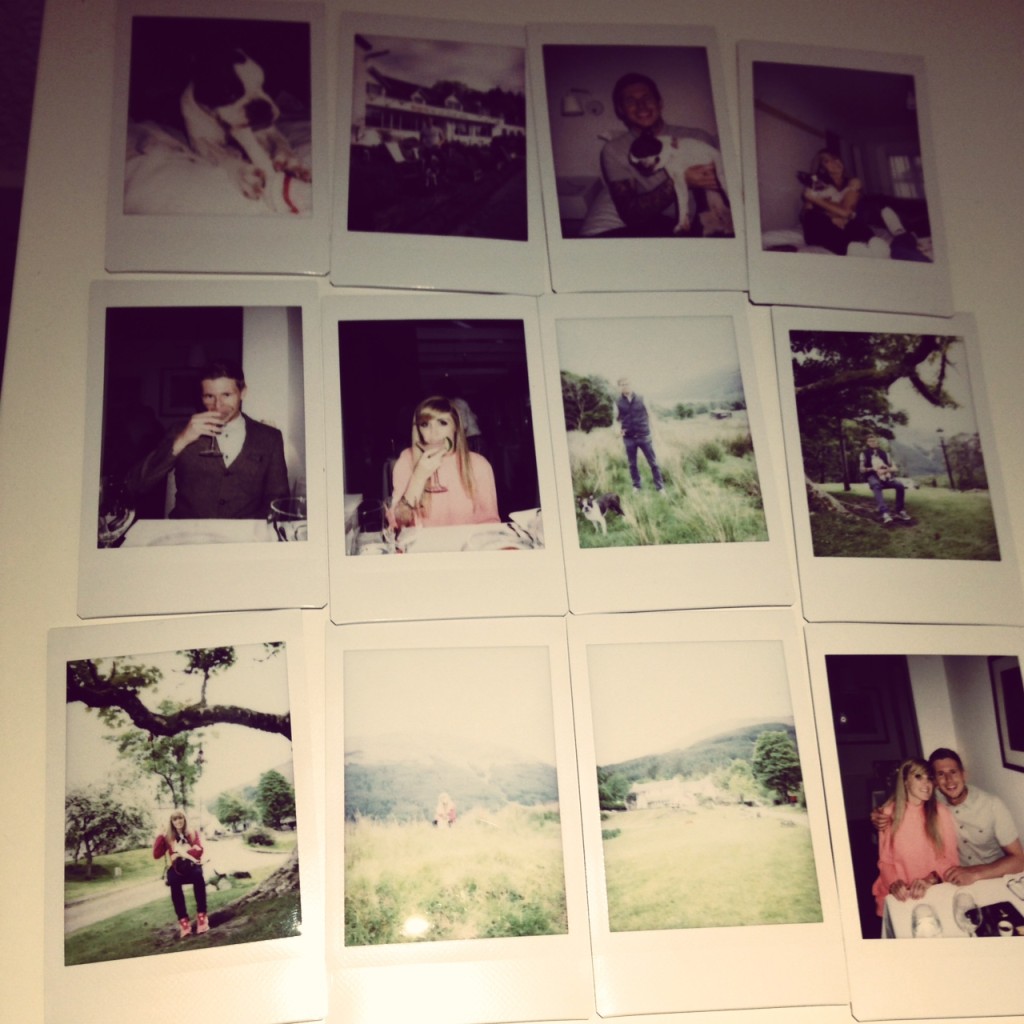 Having worked at an agency which serves the national tourist organisation for over five and a half years, there’s often been occasions I have been researching and writing copy on locations in Scotland, which has then resulted in a fierce urge to visit such places. Monachyle  Mhor, idyllically situated amidst 2000 acres of private land in the sleepy braes of Balquhidder, has been on my list of things to do since including them in some promotional activity last year.

First off, it is a pink boutique hotel (I was sold on first sight) and is celebrated as being one of Scotland’s top foodie locations.  Part of the ‘Mhor’ collection of establishments, which are all owned and run by the Lewis family and includes Mhor Fish and Mhor Bread (an artisan bakery and tearoom on Callander main street) and more recently Mhor84, what is clear is that the owners of this brand know good food, and bloody well at that.

It is for this reason when an itison deal appeared in my inbox a few months before the wedding for a £35 per night stay at the Mhor84 Motel, I thought this would offer the ideal location for Lee and I’s mini-moon after the wedding and the perfect chance to visit Monachyle Mhor (which is located six miles from the motel).  We therefore booked three nights in a pet friendly room so little Haggis McTartan could join us and were most impressed with our stay at the motel.

The immediate word that sprung to mind on pulling up to Mhor84 was ‘quirky’.  A row of stag antlers lines the exterior face of the motel and when inside, your eye is drawn to white-washed walls, wooden floors, natural looking wooden tables, wooden pews and some pretty eccentric artefacts including stuffed ferrets (three of which I am convinced were set up in a compromising position).  Vintage-style crockery also lines the walls and the intimate bar is built into an old Glengoyne whisky cask.

The atmosphere is a Highland one, so warm, friendly and exceptionally laidback.  The motel is situated on the recently developed Rob Roy Way and so expect to see some hardcore walkers in for a break and a real mix of older and younger people.

Lee, Haggis and I were shown to our room, which adhered to a minimalist style, again with white-washed walls, what looked like an old cloakroom rail along one wall, a large comfy white bed with a star patterned shawl over it and then a bathroom with floor to ceiling retro marble-effect tiles.  Nothing pretentious or stuffy about it and the best word to describe it is simply ‘cool’.

Starving (as we always are), we made our way down to the bar area, which allows dogs, and ordered dinner from a menu that is unexpectedly impressive.  With something for everyone, what came next truly was a mouth watering and gastronomic experience (one which I would truly recommend you all to try) filled with oysters, seafood chowder, veal and what was one of the best burgers I have ever tasted.  We stuck to cokes that night (due to the bucket-load of booze just consumed at the wedding) but for all of that grub our bill was only £50, which is such good value considering the quality of both the food and the cooking.

As mentioned in a previous post, I tend to live by the ‘see-food’ diet (see it, eat it) but over the past few years I have been conscientiously trying to develop a more discerning foodie palette, and spending lots of cold harsh cash whilst at it.  I have of course accepted that I am never going to be the type of person who turns their nose up at a McDonalds, Domino’s pizza smothered in garlic and herb dip (did you know that one of those little pots of sauce equates to 200 calories, I mean what the hell!?) or indeed chips, cheese and pakora sauce. You should probably therefore understand at this stage, that I am unlikely to become the type of foodie critic who will reference the various accents of various flavours in the food, discussing what there could of been more of or even how I would prepare a dish differently.

What I do have however, is the benefit of comparison when it comes to fine-dining, having been extremely fortunate to have frequented some pretty high-end Scottish foodie locations including, Gleneagles, Turnberry, Nick Nairn’s and Martin Wishart at Loch Lomond (although on this evening I was suffering from a severe concussion after doing a wheelie off the back of a quad bike and so my memory of the seven-course tasting menu is hazy to say the least.  Infact, my main memory of that evening was meeting Paolo Nutini after the dinner with the Blue-Chicks before downing cocktails and then blacking out at the Mansion House at Cameron House…thank goodness that wild streak has somewhat subsided).  I guess what I am trying to say, is that I know top quality food which has been carefully sourced from Scotland’s ‘natural larder’ (copywriting terms coming to the forefront there) and is then prepared with style.

With this knowledge, I therefore feel able to conclude that the food served at Mhor84 was simply delicious and I would wholeheartedly suggest a visit, if not to stay then certainly to enjoy the menu.  If you do stay however, be sure to sample both the veggie and the full Scottish breakfast, let that settle and enjoy one of the many cakes displayed (which I assume are delivered from the bakery each morning).  I fell in the love with the scones…serious love…and these were served with thick cream and homemade jam…yum!

On the second day of our mini-moon, we drove up to the Monachyle Mhor Hotel, had a walk about the grounds with wee Haggis and bumped into a very nice and chatty lady called Mhairi, who filled us in on the Monachyle Mhor festival which had taken place that weekend.  She told us that Monachyle Mhor had hosted a Big Feast and ceilidh in their barn on the Saturday night, and at this there was five famous Scottish chefs cooking a course of the feast each for all of the guests(Andrew Fairlie was mentioned).  Immediately after this convo, Lee and I were straight over to reception to book up for next year’s festival!

Following our chat with Mhairi we found out that she is infact one of the founders of Mhor84 and actually owns Cafezique and Delizique in Glasgow’s westend, again highlighting the very foodie background of Mhor and giving you an idea of the style of food on offer in the motel.

The following evening we had booked an evening meal at Monachyle Mhor itself (finally, after a year of longing to try it), which was the crème de la crème of our stay.  Leaving Haggis in the room, we took a taxi up to the hotel (FYI if you do this, the six-mile taxi will cost you £12.50 each way) where we were greeted and taken into the intimate bar of the hotel to order some pre-dinner drinks to sip by candlelight.  Whilst enjoying a daiquiri and elderflower concoction, we were then provided with a selection of canapés and on finishing these, were led into the conservatory area of the hotel to be seated for dinner.

On the menu, there really is something for everyone to enjoy, whether a veggie, lover of fish or full scale carnivore who cannot get enough of rich meats.  I ordered the pigeon, followed by the Scottish Beef and Lee went for salmon, followed by cod in a creamy curried sauce (of course we halved each dish, which is something we always do and is seriously a trait I would advise any single girls to look for in a future spouse – no-one likes a ‘meany’ when it comes food, a food sharer truly leads to a happier dining experience).

During the main, I of course managed to ping a small potato (all the veg served is grown in the hotel’s own garden) off my plate and onto my favourite pink Chelsea Girl blouse from River Island, covering various small areas with a yellow staining sauce.  Taking the call that I would rather sit in the posh surrounds of the hotel with a wet top, than allowing the blouse to become permanently stained, I slid off to the toilet and stood scrubbing before walking back to our table, head slightly dipped with a big red face and a top eligible for a wet t-shirt contest.  If only bibs were acceptable for adults…

We rounded off the meal with a rich chocolate and a light raspberry dessert and then ended with an impressive cheese board accompanied by the hotel’s recommendation for dessert wine.  Ever sampled a mull cheddar soaked in real ale on a homemade oatcake with tangy chutney, well I can tell you, it was out of this world.

We could not fault our evening at Monachyle Mhor. Everything from the presentation and the taste of the food to the manners of the staff, and the traditional yet rather gothic décor of the hotel was quite simply, perfect.  And at £55 per person for that which is divine, again is such good value for money.  If you do therefore get a chance for a weekend away, why not overlook the usual places and escape to the Perthshire Highlands for a stay at either Mhor84 or Monachyle Mhor, you won’t be disappointed. Slange Var! x