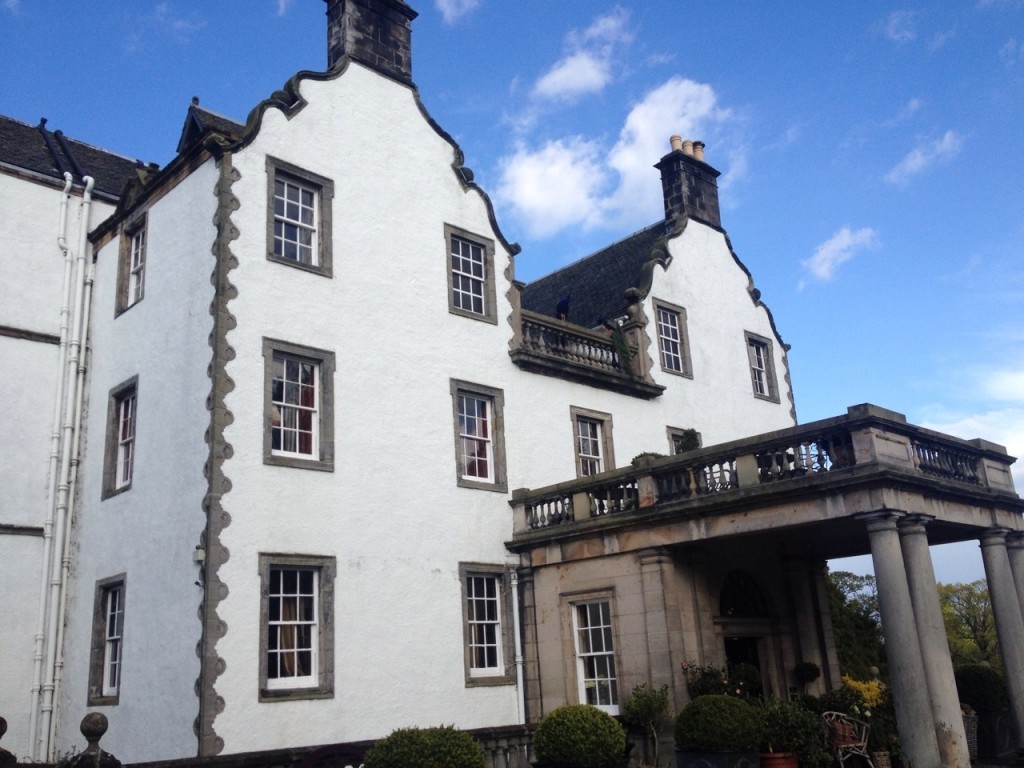 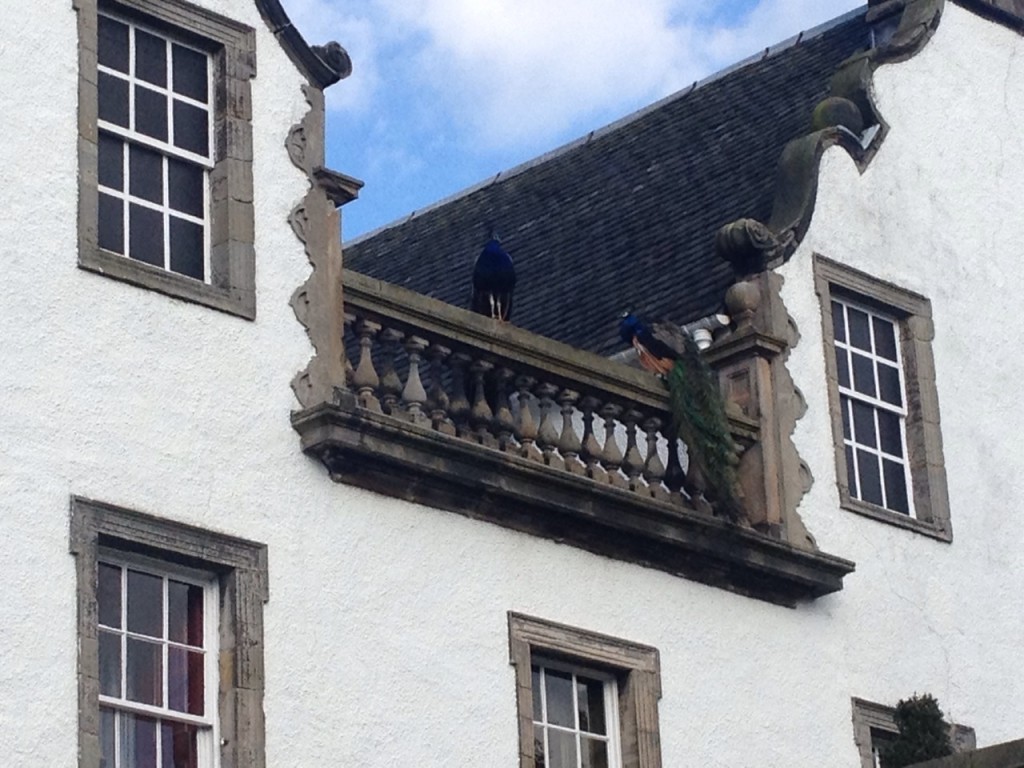 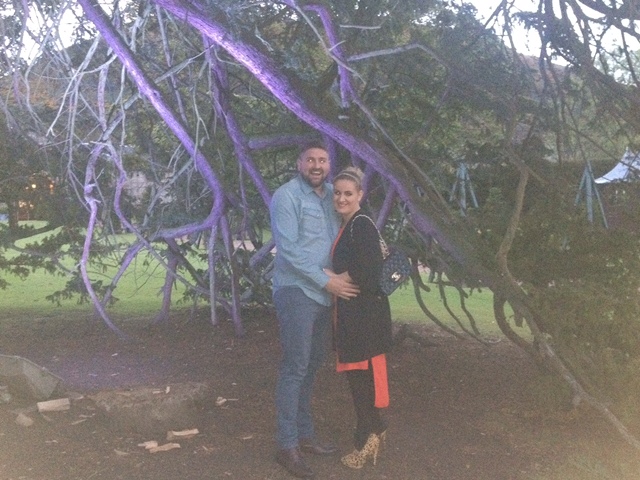 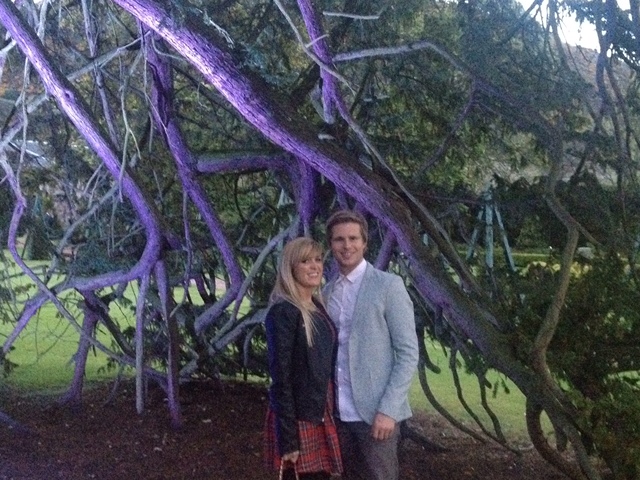 I wanted to take a sec to tell you about a visit to Prestonfield House last Saturday, which was a surprise dinner for Lee to celebrate his 29th Birthday (as in the year before 30, as in we are almost at the end of our 20s…)

Situated in Edinburgh, Prestonfield House is part of the uber opulent and extravagant (in a very good way) James Thomson Collection.  This famous portfolio also includes: The Witchery (which has been on the Culinary and Hotelier Bucket List since I worked with VisitScotland) and The Tower Restaurant (located at the top floor of the National Museum Scotland) which is said to be Edinburgh’s finest rooftop restaurant.

The ‘collection’ has been long celebrated as offering the ultimate in fine-dining and with this I would have to agree. Prestonfield House surpassed my expectations and did so with dramatic effect.

Driving up to this 5-star and very exclusive hotel, you cannot help feel slightly in awe at the period property and its surrounding landscape which includes a rather breathtaking panoramic vista of Arthur’s Seat.  Dreanie and Sean came with us and on parking up, the four of us had to take a moment to drink in the sight of a row of massive peacock’s perched on a balcony of the house (a waitress later told us they were in mating season and so the impressive screeching was their trying to attract a female bird).

On walking into the hotel, it is then the deep red drama of the decor which captures your attention. ‘Theatrical’ best describes the interior and this idea is emphasised in the details (like the hats hanging in the men’s bathroom – not that I visited – the chaise lounge in the females ‘powder room’, the candelabras on each dining table holding long twinkling candles lit even if no guest is dining, the plush velvet curtains, dark woods, private rooms like the ‘leather room’, furniture made with stag antlers and the abundance of the colour red). 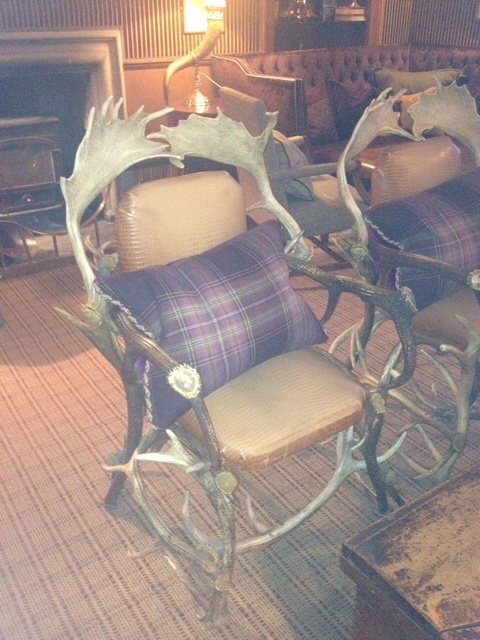 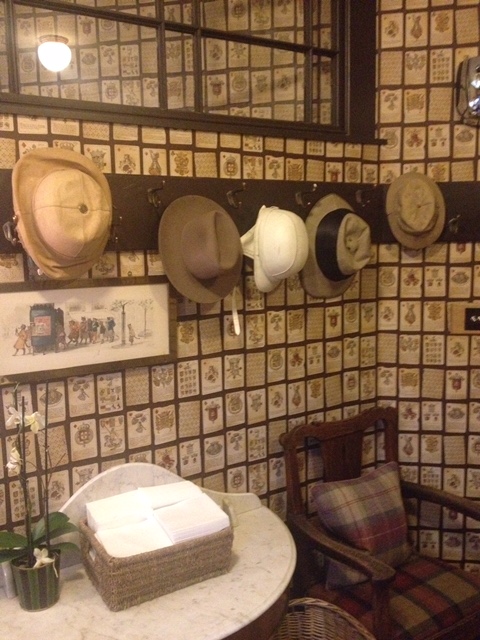 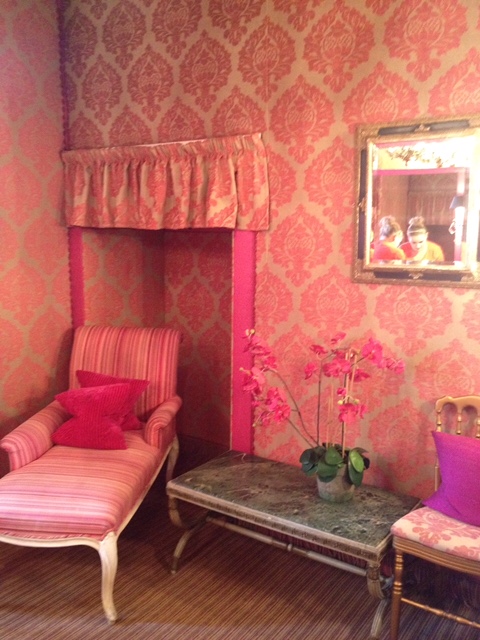 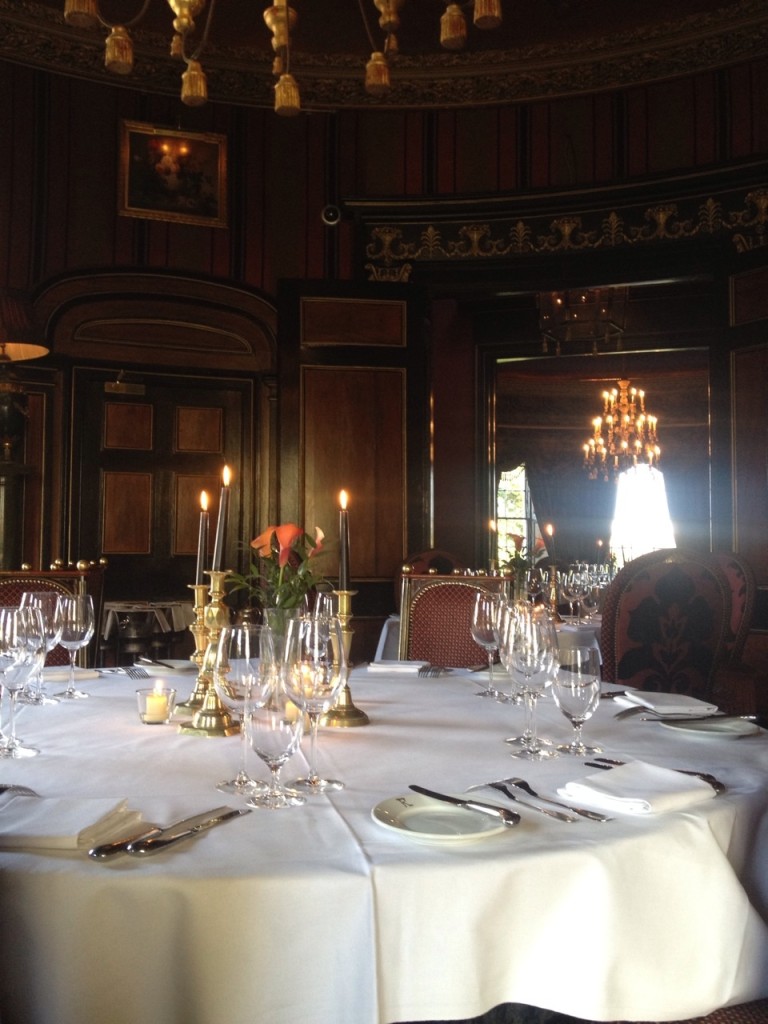 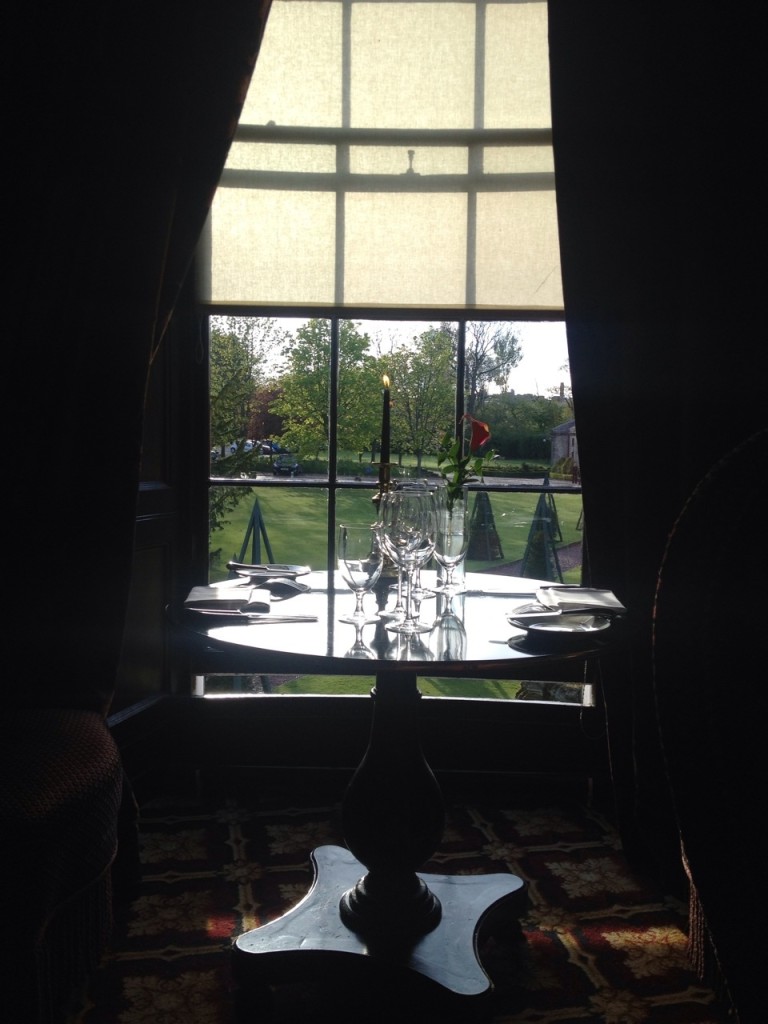 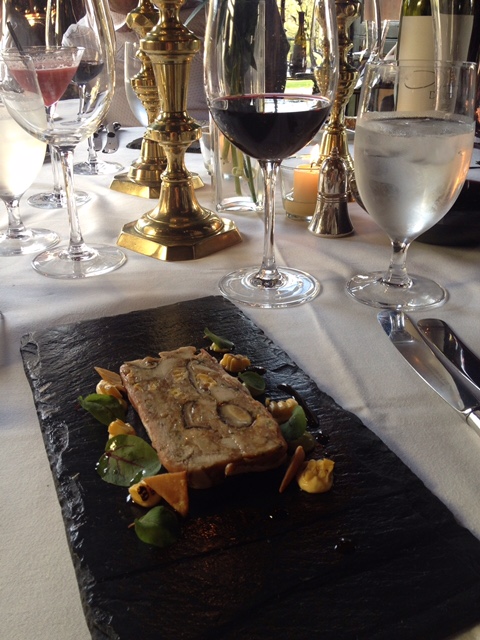 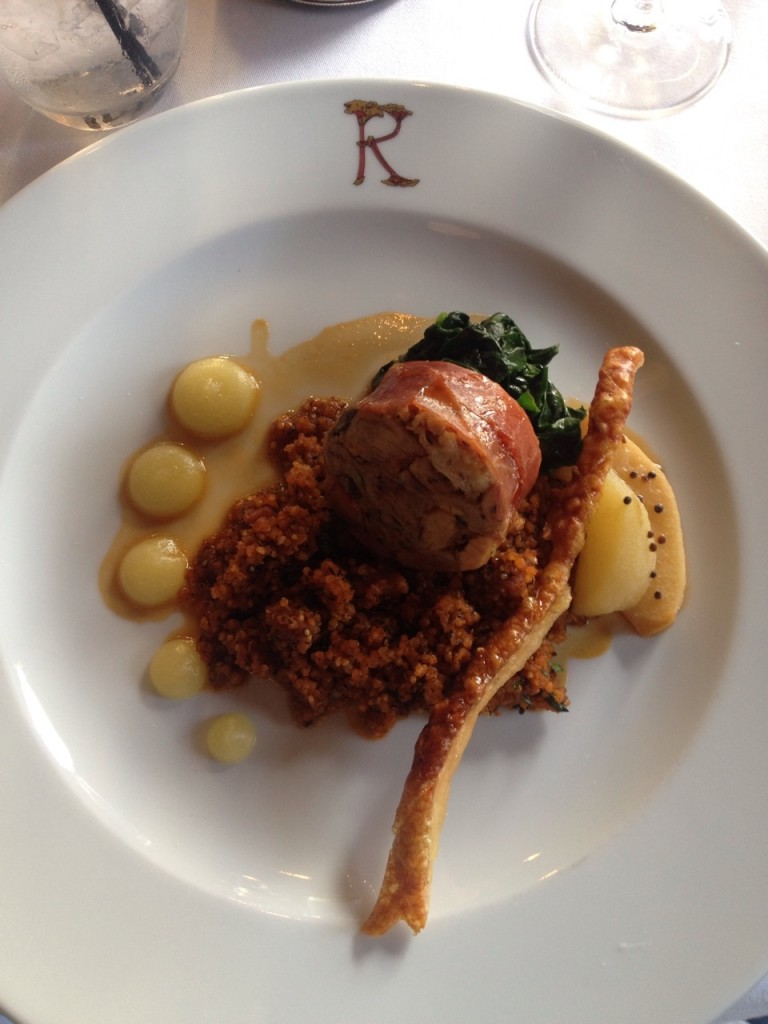 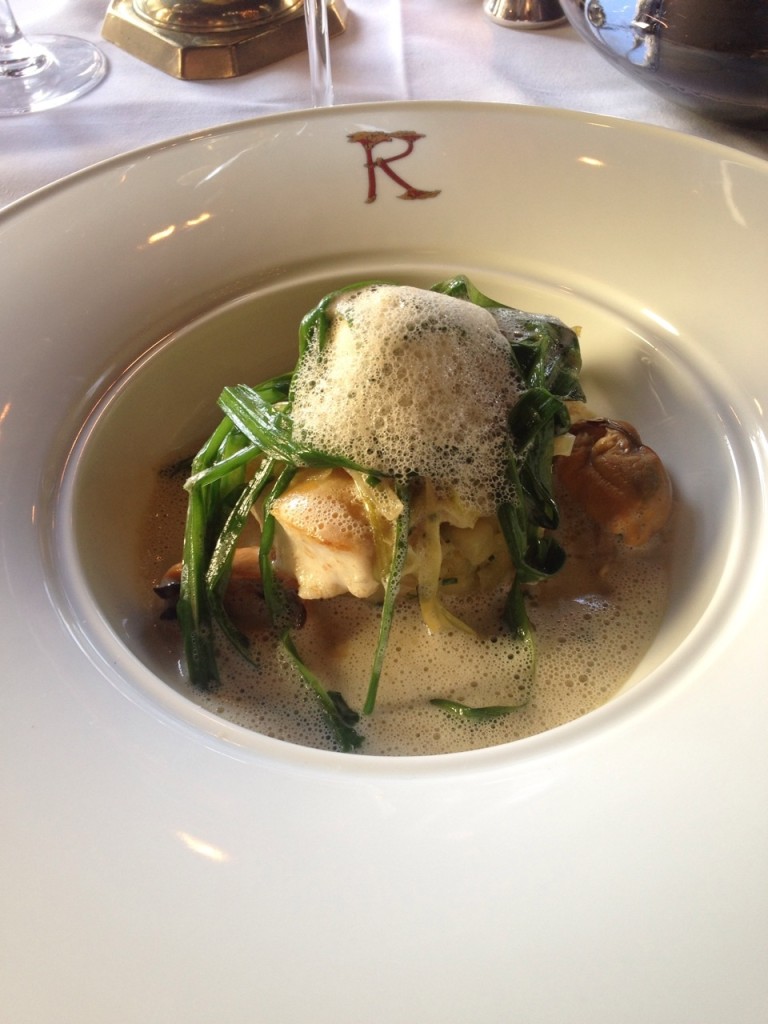 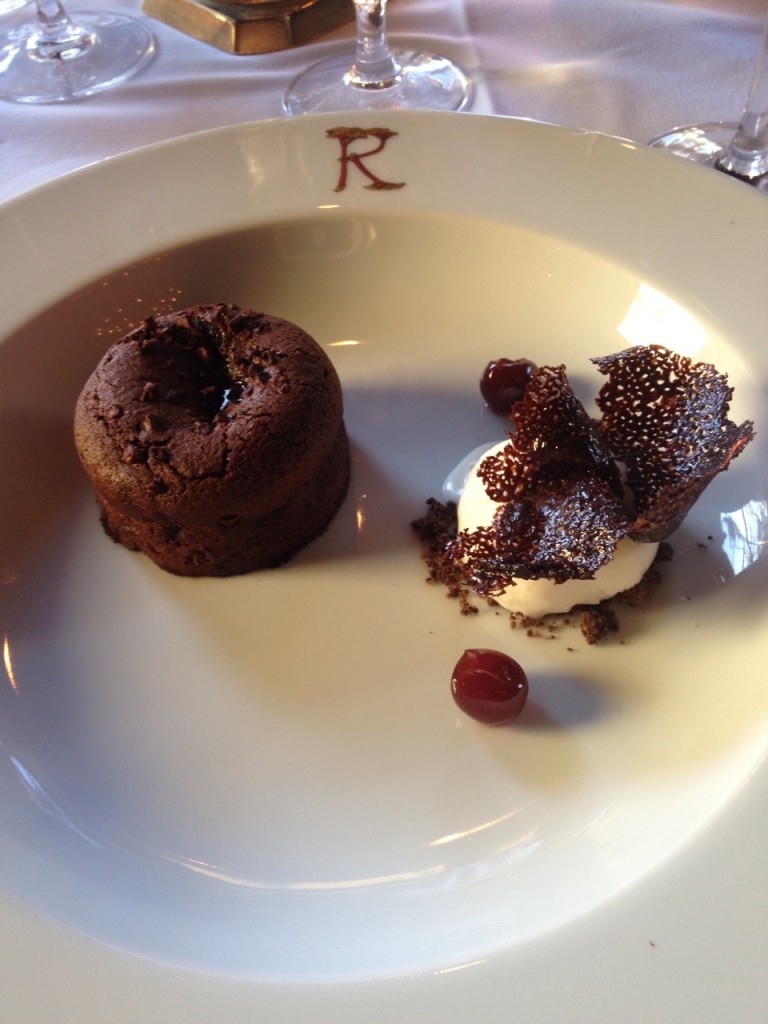 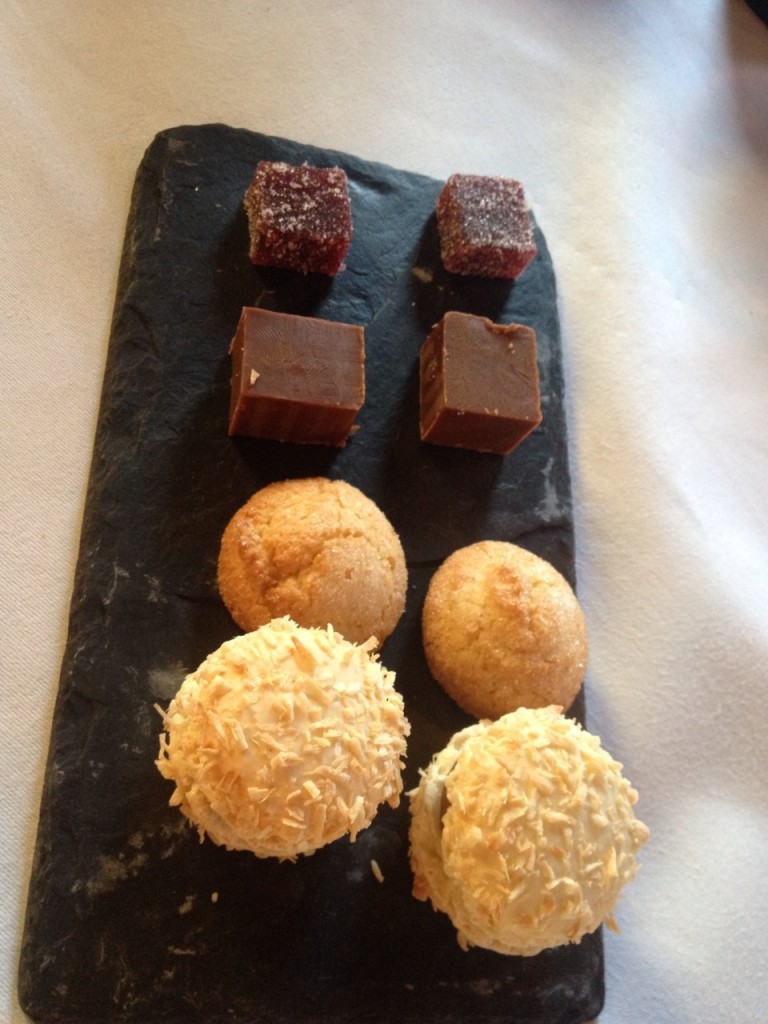 Like the decor, the food is also rich, cleverly designed and, as you would expect, cooked to perfection.  We ate from the 3 courses for £35 menu (a Spring offer running across the James Thomson Collection), but even out with the deal, the food is reasonable for its 5-star location.  The selection is also varied and understandable – I hate it when chefs feel the need to bamboozle diners with funny names for simple foods.

I started with the rabbit and shitake mushroom, then enjoyed the Hake in a slightly curried sauce on a bed of potato as a main and finished with a sumptuous chocolate dessert.  To be honest, we all pretty much had the same, with the exception of the starter where Dreanie had the soup and then for the main Sean had the pork – all very much so to rave reviews.

Bread was served at the start of the meal, which was deliciously warm and came in varied flavours and there was none of this 1 piece each malarky, the waitress came round 3 times and offered 2 bits each time (such generosity is sometimes unexpected in exceptionally posh places).  Tip – to extend the culinary delights after your meal be sure to order a coffee, as you are served with a very tasty tray of jellies, macaroons, shortbread and chocolates.

When it came to vino, Lee and I shared a bottle of Malbec, which  this was served in a beautiful carafe which I thought was a lovely touch.  This was of course always poured for us when our glasses became low and the bottle was a reasonable price at £34 (we had expected all wines to be over £50).

After the meal, the four of us retired to a private room to enjoy an after-dinner drink, which really added to the unique experience.  In total, each couple spent about £110 which I think was well worth it and to be honest what with the ageing process, I think we are all at the stage we would rather that than a night on the lash… 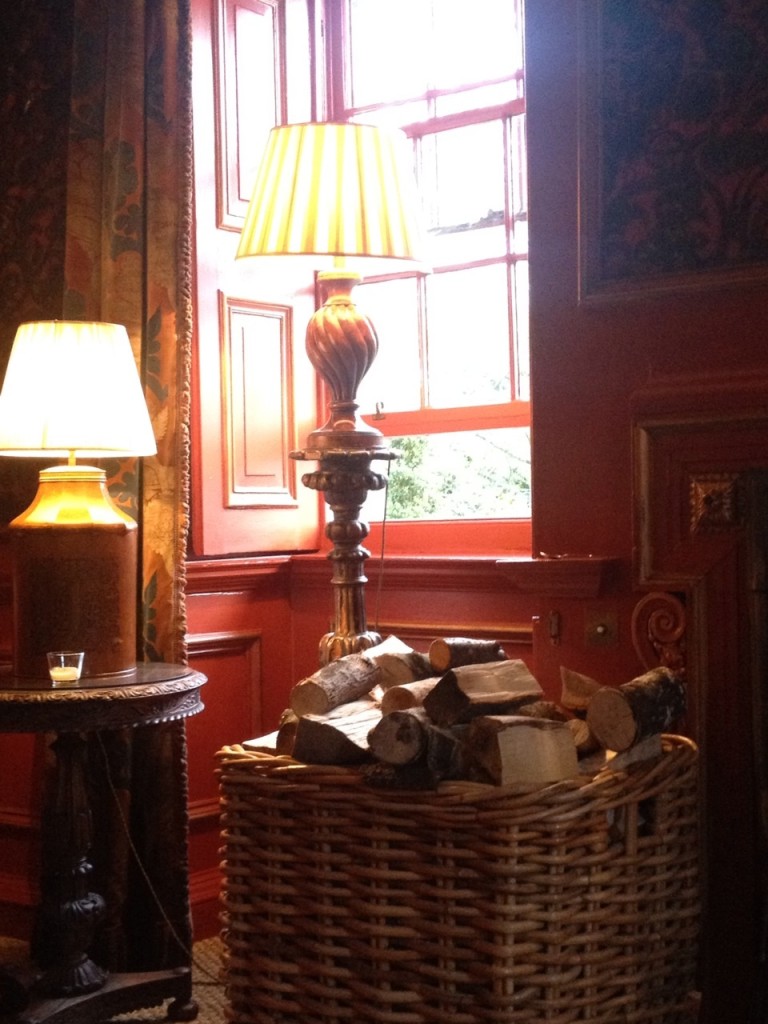 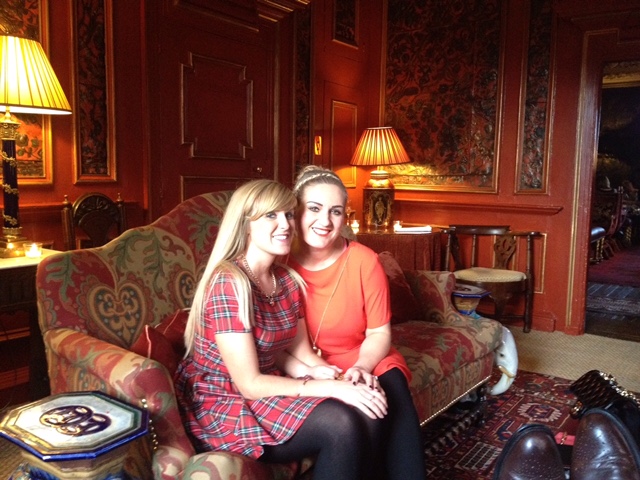 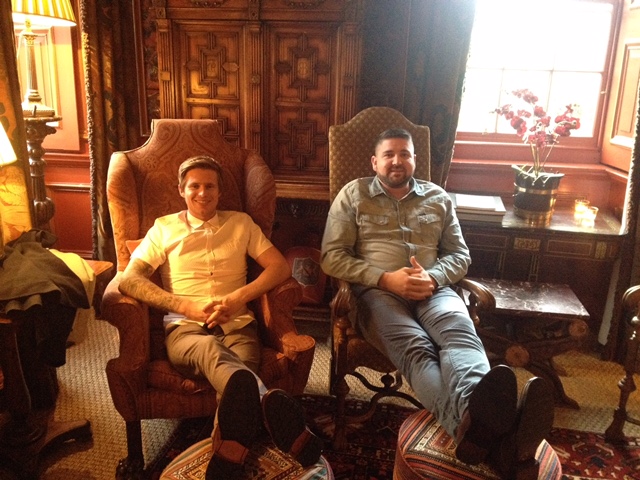 Dreanie, bless her, was the designated driver for the night, but was able to pick any cocktail she wanted in its mocktail counterpart and so did not feel like she was massively missing out (although I did catch her sniffing the vino in the carafe on a few occasions…).  There is in fact fantastic reason for this choice to remain dry however, and that is because, I am delighted to say, she and Sean have a wee baby on the way!!

So excited for them both and cannot wait to meet the new addition, which is set to be a Christmas baby.

The emotional rollercoaster that is house-selling – update

The Cottage has been on the market now for little over 8 days and we have had about 13 viewers, with 2 people looking into mortgages potentially with a view to putting down an offer, very exciting but stressful times.

I have to admit that sometimes I really struggle with positivity and so trying to retain a healthy outlook, on what has so far been a great response, has taken its toll this week…that along with keeping the cottage as pristine as possible, not such a struggle for Lee, but I on the other hand often like to use my bedroom floor as a secondary wardrobe…

Also unsure if it is house-selling related, but I have found myself drained of all energy this weekend and slightly on the emotional-wreck end of the spectrum.  Being an anti-napper, I found one a necessity yesterday after what was really a very chilled out day – Lee and I had a couple’s massage in the morning (much to my amusement Lee had forgotten to put on boxer shorts in the morning, making things ever so slightly awkward for both him and I guess the therapist too) which was a birthday present, then we had a nice lunch and then rounded off the day with a food shop – so really no excuse for a nap.

Hope you all had a fab weekend x

Our quirky, cosy cottage is on the market...